A recap of the Moose game against the Eagles.

The Skinny: The 12-16-2-0 Moose played host to the 15-11-3-1 Colorado Eagles in a re-match that saw Manitoba pick up a 4-0 win in the first ever meeting between the AHL’s newest team and the local squad.  The Moose said goodbye to Sami Niku for the foreseeable future as he was recalled by the Jets to cover the injury to Dustin Byfuglien.  The team recalled Jacob Cederholm up from the Icemen but he didn’t arrive prior to puck drop. 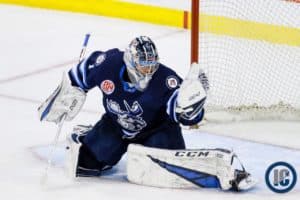 Similar to what we saw on Saturday the Moose held a 1-0 lead over the Eagles after 20 minutes.  It was Brent Pedersen in his second straight game who scored the goal to get things going in the opening frame.  And just like we saw yesterday quickly in the middle frame the Moose scored again thanks to the French Connection as Alexis D’Aoust scored shorthanded on a beauty feed by Felix Girard to make it 2-0.  Marko Dano scored his first AHL goal since the 2015-16 regular season (when he was with the IceHogs) when he buried his own rebound to give Manitoba a 3-0 lead.  The Moose were a little sloppy as the 2nd period came to a conclusion and with two minutes to go in the frame it was former Moose Scott Kosmachuk who finished off a 3 on 2 to make it a 3-1 game.  JC Lipon had thought he had scored at the end of the 2nd but the time had expired. Manitoba would have to kill a short 5 on 3 to start the final frame but were able to hold off the Eagles.  Ultimately Lipon wouldn’t be denied and he scored a long range empty netter to give the Moose a 4-1 lead late in the 3rd and that is how the game would end.

In total Colorado was only able to beat Eric Comrie once in 70 shots after 6 periods of hockey this weekend.

The Moose will travel to Texas on Tuesday as they get ready for a three game road trip which starts on Wednesday, January 2 at 7:00 pm, versus the Rampage in San Antonio.