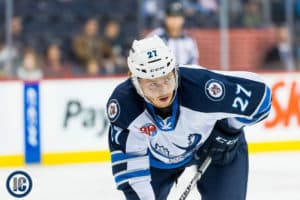 Mason Appleton has 8 goals and 10 assists for 18 points in 19 games for the Manitoba Moose this season which would put him third in overall team scoring.  Of course when you consider that Appleton hasn’t played a game in the AHL since November 24th, 2018 after being recalled to the big club you can understand why last season’s AHL Rookie of the Year was chosen to represent the Moose.  Since being called up to the big club he has played in 14 games with the Jets and only recently came out of the lineup.

Today the AHL announced that he was chosen to represent the Moose at the 2019 AHL All-Star game which is taking place in Springfield, Massachusetts on January 26th and 27th.  Of course he may not be with the Moose which will be similar to what happened last season when Jack Roslovic was named the All-Star but due to his recall to the Jets when Mark Scheifele went down with an injury Appleton was named as his replacement.

If I had to guess, and if Appleton isn’t back with the Moose, then I would suspect that Logan Shaw or Michael Spacek would be named his replacement but that won’t be known for a little while yet.