Moose comeback was fleeting in 4-2 loss to Admirals

Follow me @PegPeteHockey for coverage on the Manitoba Moose, Winnipeg Jets prospects, and the NHL Draft

Tonight’s match-up between the Moose and the Milwaukee Admirals (Nashville) was a case of two teams heading in different directions. The Admirals are third overall in the AHL, with a record of 43-21-5, and are gunning for a Calder Cup championships, while the Moose were eliminated from playoff contention several weeks ago, The biggest story line coming into tonight’s game was the pro debuts of young forward prospects Brendan Lemieux and Jansen Harkins. 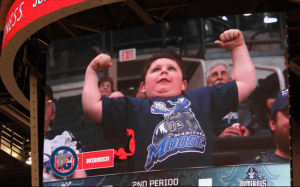 Key Plays of  the Game

The first was quiet, with no memorable scoring chances, although the Moose did out-shot the Admirals 11-7. The first ended with the score 0-0.

Early in the second, Jansen Harkins made a great cross-ice feed to Brandon Denham, but Denham was unable to beat standout, rookie goaltender, Juuse Saros.

After Nashville’s 1st round pick (2014), Kevin Fiala made a nice feed into the slot, Adam Payerl found a rebound and buried it past Connor Hellebuyck to put the Admirals up 1-0.

Shortly thereafter, John Albert raced down his off wing and made a nice backhand sauce pass to Chase De Leo, but De Leo couldn’t beat Saros.

After a Brendan Lemieux penalty, Pontus Aberg blasted a one-timer from the left face-off dot which beat Hellebuyck short side. 2-0 Admirals.

Two minutes into the third, Brendan Lemieux took the puck off the wall and drove towards the net, drawing a penalty on the play. On the ensuing powerplay, Jansen Harkins directed the puck at the net, purposely creating a rebound into the slot, which found the stick of Brandon Denham, who scored his first AHL goal. (Harkins got his first AHL point). Moose now down 2-1.

With about 6 minutes left, the puck came to Brendan Lemieux at the side of the net, and he just about scored his first AHL goal on a backhander.

With 1:47 to go, and the goaltender pulled for the extra attacker, John Albert let a slapper go from the point which was skillfully deflected in the slot by Dan DeSalvo. Moose down by just 1.

With 59 seconds left, Kevin Fiala got a partial break and deposited the puck into the empty net. 4-2 Admirals.

Josh Morrissey remains out, and hasn’t practiced with the team since his injury on March 7; his return this season is looking increasingly unlikely. Winger Scott Kosmachuk also was out of tonight’s lineup, while defenceman Jan Kostalek made his return after being out since March 11.

John Albert – He was involved in the play throughout the night, and was especially dangerous while short-handed. After a tough first-half of the season where he played a long stretch of games at less than 100%, Albert has been the most consistent forward for the Moose for the past few months.

Jansen Harkins – He got his first AHL point on the powerplay, and almost had an even prettier assist earlier in the game on a creative, cross-seem pass. His strength is definitely his playmaking ability, while his skating is an area that will need to improve over the next few years in order to create more time and space at the pro level.

Brendan Lemieux – He had a few chances tonight, and showed good tenacity on the puck, and a hard, quick release on his shot. While he wasn’t able to get on the scoreboard, he looked like he belonged.

Centre Jansen Harkins – a 2nd round pick in 2015 – talks about his pro debut, and his first AHL point

Recent NCAA grad, Brandon Denham discusses his first AHL goal, and getting accustomed to the AHL