Moose thumped by Admirals 5-2 in re-match

For news on the Moose, Jets’ prospects, and the NHL draft, follow me @PegPeteHockey

After losing last night’s battle against the Admirals, 4-2, the Moose came in looking to win their final match-up of the season. Despite their respective places in the standings – the Admirals in third overall in the AHL, the Moose second from the bottom – Manitoba came into this game witha winning record against Milwaukee, with a record of 4-2-1. This marked the second game in the pro careers of Brendan Lemieux and Jansen Harkins; Eric Comrie got the start in goal. 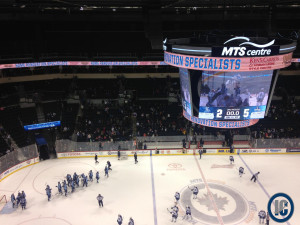 With about 6 minutes left in the first, Dan DeSalvo circled the net and passed it out to Andrew MacWilliam, who one-timed his first of the year to put the Moose up 1-0.

On an Admirals’ PP, Russia’s most recent World Junior captain, Vladislav Kamenev, blasted a one-timer from the right circle to tie the game at 1.

Towards the end of the period, an odd-man rush by Milwaukee created a juicy rebound for Felix Girard, who put it in the yawning cage to give the Admirals a 2-1 lead.

In the waning moments of the second, ECHL call-up Ben Walker broke in all alone and made a nice forehand-backhand deke, but he couldn’t raise it over the pad of Marek Mazanec.

5 minutes into the third, with the Moose short-handed, Brendan Lemieux stole the puck at the blueline and broke in two-on-one with Chase De Leo; he fed the puck over, but De Leo was foiled on an aggressive poke-check by Mazanec.

Halfway through the third, Chase De Leo played give-and-go with Lemieux, who got a nice chance in the slot for his first AHL goal, but wasn’t able to bury.

After defender Sean Escobedo fanned on a shot, Dan DeSalvo picked up the puck and fed Darren Kramer, who made a great deke to his forehand, scoring to get the Moose within one, 3-2.

After a defensive breakdown just outside the Moose blueline, the Admirals came in two-on-one – a cross-ice pass came to Jamie Devane, and he scored to restore the Admirals’ two goal lead.

Late in the 3rd, on another Admirals’ powerplay, Pontus Aberg scored a gorgeous goal in tight, deking around Comrie and sliding the puck home. 5-2 Admirals.

Brendan Lemieux – Lemieux was the most noticeable player on the ice tonight for the Moose, making things happen with speed and tenacity. He was dangerous on the PK, created several scoring chances, and had a few good chances to notch his first pro goal. He also had very nice chemistry with linemate, Chase De Leo.

Dan Desalvo – With two more assists tonight, DeSalvo now has 10 points in 13 AHL games. This coming from a guy who came out of the NCAA last spring, and couldn’t find a home on a single team in the AHL. He was just named to the ECHL All-Rookie team after scoring 51 points in just 55 games, but it looks like he’s played his last game at that level. DeSalvo’s flaw is obvious – he’s 5’8 – but his skill and smarts could make him a tremendous AHL player. And you never know, his story so far is reminiscent of David Desharnais…

Chase De Leo – He was very involved in the attack tonight, and meshed well with Lemieux, as noted above. After being the team’s most consistent player for much of the season, he’s been quiet since returning from his brief stint with the Jets; he started looking dangerous again tonight.