The Moose finished up a series against the Charlotte Checkers last week, winning 2-1 on Monday at MTS Centre. Scott Kosmachuk had a whale of a game, scoring both goals in sniper-fashion, while Connor Hellebuyck allowed just one goal on 27 shots. 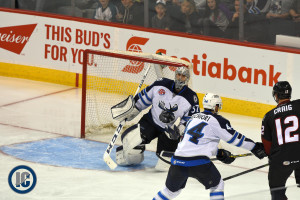 The Moose then played two on the road against the Iowa Wild, winning the first game 3-2, and losing the second by the same score. Connor Hellebuyck had his 5-game winning streak snapped in the loss, while defenceman Brenden Kichton kept his 5-game point streak going. Kichton now leads the team in scoring with 38 points in 65 games, while Kosmachuk leads the team in goals with 17.  He was recalled by the Jets this morning.

With injuries throughout the organization at both the AHL and NHL levels, the Moose have relied on 10, undrafted players ECHL players this season. Among the most interesting in the bunch is defenceman Jake Baker. Last week, Head Coach Keith McCambridge noted that, due to injuries and call-ups, Baker had been thrust into a top-2 role on the Moose defence, and had been a really pleasant surprise for the coaching staff.

At 6’5, 220+, Baker has the size and reach to contain opposing forwards, especially given a surprisingly good skating stride. While no one would confuse him with a puck-moving defenceman, he doesn’t have hands of stone either. You could safely compare him to current Jets’ call-up, Julian Melchiori in terms of size, skating, and a physical style. In a worst-case, Baker gives the Moose a potential top-4 option for next season. Furthermore, he probably has more upside than Andrew MacWilliam – a player who was a two-way NHL contract – meaning that Baker would also be a cheaper option. McCambridge alluded to the fact that a player like Baker might be able to stick around next year, and if he does earn himself a full contract, it would be a nice story for a 24-year-old who started the season with the Quad City Mallards of the ECHL.

Prior to the 2015 NHL Entry Draft, Jansen Harkins finished a very successful 2014-2015 season, racking up 79 points in 70 games for Prince George of  the WHL. He was expected by many to be selected late in the first round, but instead dropped to 47th, where he was picked by the Jets.

Fast forward a year, and it’s hard to say that this past season was anything but a disappointment for Harkins. He failed to build on, or even match last year’s point totals, ending up with just 57 points in 69 games. (After a tough start, he did have 51 points in the last 56 games). He was out-scored by three teammates, none of whom were drafted as early, if they were drafted at all. His team was then swept in the first round of the playoffs by Matt Barzal’s Seattle Thunderbirds; Harkins at least finished strong, leading the Cougars with 2 goals and 5 points in those 4 games.

Now Harkins has a big opportunity to make an impression on the organization, after being signed to an Amateur Tryout Agreement (ATO) on Saturday. He will join the Moose for the remainder of the season, and will have the chance to play in as many as 6 games. At 6’1, 187, Harkins is a two-way centre, known for his work ethic and his playmaking ability. But make no mistake, the AHL is not an easy league for a teenager – look no further than Mark Scheifele, who played 10 games in the 2012 AHL playoffs when he was 19, and managed just 1 assist.

Dave went one on one with him yesterday at the IcePlex and you can listen to that interview here.

After his Windsor Spitfires were ousted from the OHL playoffs by the Kitchener Rangers this weekend, Brendan Lemieux will join the Moose to play out the string of 6 games. Lemieux had an excellent finish to his OHL career, with 32 goals and 62 points in just 45 games, plus another 4 goals and an assist in just 3 playoff games. That included a hat trick in game 4 which led his team to their only victory in the series.

Lemieux is an intriguing prospect for the Jets – while many others have high-end skill, he’s the only player in the system who might fit the “power-forward” mould. While he’s just 20 years old, he’s already 6’1, 210, and displays a knack for scoring gritty goals around the net. He also plays a punishing, physical style, which, in traditional terms, means he could be suited to a bottom-6 role if his scoring doesn’t translate perfectly to the NHL level. Aside from rounding out his game in terms of defensive play, one of the main areas that Lemieux needs to improve is discipline. He was suspended several times during his OHL career, including 10 games at the start of this season for a hit to the head. Given that the Jets’ already have too much admiration for the penalty box, Lemieux may not get an extended look until the Jets know he won’t add further to that problem.

Dave also went one on one with him today at the IcePlex and you can listen to that interview here.

Tanev is billed as an energy player. He’s a good skater, a hard worker, and tenacious on the forecheck. While he can chip in a little offensively, he’s best suited to a bottom-6 role, and a regular spot on the penalty kill. Providence coach, Nate Leaman, was asked to compare Brandon to his older brother Chris, but shrugged off the comparison, implying that he’s not quite in the same league as his talented older brother.

The plan is to get Tanev into the Jets’ lineup at some point on their three-game road trip through California. It’s also possible for him to join the Moose after the Jets’ season ends on April 9, but that remains to be seen. Given the glut of young forwards in the organization already, it’s hard to say whether Tanev will stick with the Jets next season, or start next year with the Moose. Even without additions, he would need to climb over a lot of bodies to get a regular spot in the lineup – Wheeler, Ehlers, Perreault, Stafford, Armia, Dano, and Thorburn makes 7 wingers; one centre-iceman looks to move over to the wing between Scheifele, Little, Burmistrov, Lowry, and Copp; Peluso and Lipon are probably in the mix for the 13th forward spot, then you have Petan and Kosmachuk who have both impressed at times, Brendan Lemieux graduating from the OHL, the potential for a high-end young forward drafted in June, plus someone named Kyle Connor…

Coach McCambridge provided updates on the status of Jan Kostalek who is now back to practicing with the team in a regular jersey and he expects him to play tomorrow against the Admirals.  Josh Morrissey remains day to day but is skating on his own in a non-contact jersey.