The Moose took on the Iowa Wild this afternoon at Bell MTS Place in a rematch of Saturday night’s contest. They were coming off a big 4-3 shootout win last night which brought them to within six points of Central Division rival Rockford, and 5 points of both San Antonio and Chicago. It was their first win of the year against Iowa, who had won each of the previous four. Mikhail Berdin got the start in goal as the Moose looked to collect another crucial win and improve their playoff hopes. 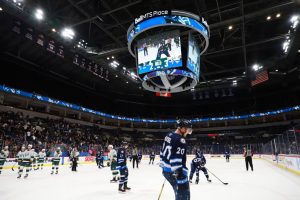 Wild defender Louie Belpedio walked into the high slot and wristed a shot on goal – the rebound fell at the feet of Sam Anas and he found the yawning cage to give the Wild a 1-0 lead just 3:30 into the first period.

With the Moose short-handed, centre David Gustafsson stole the puck near centre ice, muscled his way into the Wild end, and came in alone on goaltender Mat Robson; with a deft touch, he feathered the puck high blocker just under the bar to tie the game at 1.

Just 3:08 into the second period, Wild forward Luke Johnson was stationed with the puck at the top of the left faceoff circle and threw a hard wrister through a maze of players which found twine. The Wild would take a 2-1 lead into the third.

After the Moose had some good pressure in the Wild zone, Colton Beck entered the Moose zone somewhat innocently down the left wing, used the Moose defenceman as a screen, and rocketed a (deflected) shot short-side which beat Mikhail Berdin blocker side and gave the Wild a 3-1 edge.

With just under 8 minutes left in the third, the Wild defence got a little too focused on puck carrier David Gustafsson and the puck came down low to Kristian Vesalainen, who walked out front all alone and pulled off a nice cross-crease deke and snuck a backhander past Robson to get the Moose within one.

Heck of a play by David Gustafsson at the Wild blueline. He finds Kristian Vesalainen who scores a beauty to bring the Moose within one. pic.twitter.com/bMqmWh8Cyv

The Moose had a flurry of chances in the dying seconds of the game but ran out of time as they banged away at the front of the net.

David Gustafsson (C) – The 19-year-old is one of the youngest players in the AHL – one of 16 teenagers to suit up in the league this year – and he doesn’t look a bit out of place. His short-handed goal was a thing of beauty, showcasing powerful skating and puck control, both of which are excellent at this level. He makes smart choices with the puck, keeps the game simple, and is a fixture at 5-on-5 and the penalty kill. While he may not have the overall skill of a top-2 centre, he certainly has a strong NHL future.

Kristian Vesalainen (LW) – The 20-year-old had his hands on the puck a lot in this game and got his name on the scoresheet with a lovely goal to pull the Moose within one. His skill-set is obvious – big, good handles, good passing, and a lethal shot, but thus far he’s had trouble turning those skills into consistent production. At his age, there’s no need to panic, as his peak may still be 5 years away.

Logan Stanley (LD) – The 21-year-old defenceman plays top-pairing for the Moose and in all situations. His play today was adequate – he used his size and reach to break up plays, and made decent outlet passes. In order to make a bigger impact, he needs to add a bit more quickness – something that you could say about any 6’7 defenceman. Similar to Vesalainen, in spite of being a first round pick, there should be no rush for this player.

Mikhail Berdin (G) – The 21-year-old is a tremendous athlete who loves to compete. Sometimes he can almost be too eager to stop the puck that he gets a bit out of position, as occurred today on the first goal. The tools are there though – incredibly quick feet/legs, and according to coach Pascal Vincent, a good student of the game. It will be very interesting to see where he’s at a year from now.

They head out for six games on the road starting with the best team in the Central (and the AHL) when they take on Milwaukee on Friday.

Winnipeg Jets and L.A. Kings each reassign a player to the other’s farm club
Winnipeg Jets have assigned Mark Letestu to the Manitoba Moose on a conditioning assignment