Recap of the Moose and Condors game.

The Moose picked up the 3-1 win over the Condors on Tuesday night but it is tough to win back-to-back in the American Hockey League especially when you consider that Bakersfield is the top team in the Pacific Division.

Moose signed Declan Chisholm to an ATO.  Chisholm has completed thee years of junior with the Peterborough Petes.

– Both teams came out of the gate hot and opened with some chances;
– After killing off their second penalty of the opening period the Moose were being outshot 9-1;
– Mikhail Berdin was worth the price of admission as he was sensational in the opening period;
– Late in the 1st Marko Dano got hit with a 5 minute major and was kicked out of the game;
– The Moose PK which went 7/7 last night was again on killing off the two minors and Dano’s major;
– The 1st ended with no score but Condors outshooting Moose 14-4.
– After Logan Stanley got dangled the Condors opened the scoring on a goal that was reviewed;
– Moose D man Charles-David Beaudoin scored his first of the season to tie the game;
– Manitoba continued to apply pressure and really seemed to take control in the middle frame;
– Lots of post-whistle shenanigans throughout the game (you’d think they played in same division);
– The Moose got a 5 on 3 late in the 2nd period and Logan Shaw scored exact same goal as last night;
– Just like last night it gave the Moose a 2-1 lead which is how the 2nd period would end.
– The game had a playoff atmosphere throughout the entirety of the contest;
– Bakersfield tied the game after the Moose took an icing;
– But they didn’t sit back playing for OT and with 3:28 left Mason Appleton put home the 3-2 goal;
– That’s how this game would end. 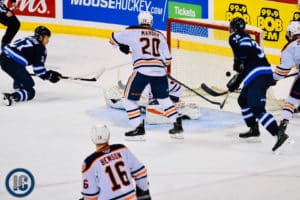 Another huge win for the Moose as they take it 3-2 over the Condors and will maintain their spot in the 4th & final playoff spot. They’ve now gone 18-2-1-1 in the last 22 games at Bell MTS Place with two more home games this weekend.

Add 29 more saves for Mikhail Berdin who picks up back-to-back wins for Manitoba. Considering he made 40 saves the night before it has been quite the 24 hours for the Moose goalie. Improves to 11-6-3 on the season.

The Moose are off on Thursday but will be back on the ice on Friday for practice as they get ready to conclude the home portion of the regular season with a pair of afternoon games at Bell MTS Place against the Stockton Heat.