Recap of the Moose game vs the Heat.

The Skinny: The Manitoba Moose played host to the Flames’ farm club, the Stockton Heat at Bell-MTS Place. With a record of 36-28-5-2, the Moose entered the game with 79 points, sitting just 2 back of divisional rivals Iowa and Milwaukee for a playoff spot. Rookie goaltender Mikhail Berdin got his 7th straight start in goal, sporting a record of 11-6-3 , with a sparkling 2.23 Goals-Against-Average, and a .932 save percentage.

Manitoba Goal: Just 3:09 into the first, Kristian Vesalainen controlled the puck in the corner and found Logan Stanley open in the slot – he snapped it on net and Mason Appleton buried the rebound. 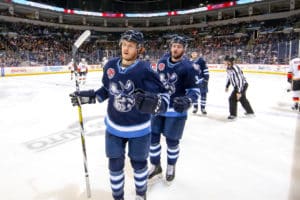 The Moose out-shot Stockton 15-7 in the first, based in large part on 4 powerplays (no penalties taken).

There were no goals in the second, but the highlight was a fantastic goal-line stand by Mikhail Berdin, who kicked out his right pad on what seemed like a sure goal. The Moose were out-shot 12-8 in the period, in large part due to being short-handed three times.

Another scoreless period – but the Moose were able to shut-down the Stockton attack (only 7 shots), and Berdin was solid.

#13 Kristian Vesalainen – he created the first goal of the game on a poised play in the corner, making a pass through a defender’s legs to Stanley in the slot. He was one of the more active players on the ice for the Moose, spending a lot of time with the puck on his stick and had a few changes on goal as well. Overall, a good game for Vesalainen.

#23 Michael Spacek – not making the impact he did earlier in the year, Spacek found himself on the 4th line today. He remains third on the team in scoring and holds a place on the powerplay, but his development seems to be stalling a bit after a nice rookie season last year.

#26 Jansen Harkins – after a scoring flurry in January and February, Harkins has come back down to earth, with his last goal coming on March 1st. Pushed out of the top-6 since the arrival of Kristian Vesalainen, Harkins is plugging away on the 3rd line and playing decent hockey, but is not keeping pace with many of the other second round picks from the 2015 draft, like Vince Dunn, Jordan Greenway, Roope Hintz, and Rasmus Andersson, all of whom were picked after him but are now NHL regulars.

#27 Mason Appleton – he picked up a big goal early on to set the Moose on a winning path, but otherwise had a fairly quiet game. After the success he had with the Jets earlier this year, it’s only a matter of  time before Appleton gets back to the big leagues and cements his spot in the Jets’ bottom-6.

#7 Logan Stanley – after some inconsistent play of late, Stanley was very good today. He played huge minutes in all situations, assisted on the game-winning goal, and used his long reach to prevent zone entries and break up plays within zone.

#36 Nelson Nogier – simple and steady, Nogier made a new nice plays in the neutral zone today preventing zone entries and holding the puck in at the offensive zone, but his offensive limitations haven’t changed.

#40 Mikhail Berdin – if you haven’t seen him play, you’re missing out on an electrifying talent. He plays the puck at every opportunity, challenges shooters with extreme aggression, and flops around his net like the goalies of yesteryear. And beyond all that, he’s also an excellent goalie. While he wasn’t overly busy today, he made a few great saves, and he made it so that Stockton had to do something special to get one by him. Following the game, his record improved to 12-6-3, with a goals-against-average of 2.12, and a .935 save percentage – outstanding numbers for any goalie, let alone a 20-year-old rookie.

Mason Appleton with the game winner gives him seven game winners this season (out of 14 goals) and 13 in his career out of his 36 career goals in the AHL.

With his seventh straight start in the books Mikhail Berdin improves to 12-6-3 for Manitoba with a 2.12 GAA & save % of 0.935. Both stats would put him 1st overall in AHL (Goalies need 1380 minutes to be considered qualified)

Sunday afternoon (2:00 pm) versus Stockton, at Bell MTS Place to close out the home portion of the regular season.