Recap of the Moose and Heat game.

The Moose concluded the home portion of the 2018-19 season with an afternoon re-match against the Heat coming into this game having won three straight games.  After yesterday’s 1-0 win the Moose moved back into a playoff spot and they will be looking to keep that rolling against Stockton.

With this being the last home game of the regular season the Moose handed out their end of year awards.  The winners were:

Despite the fact that the Moose outshot the Heat in the 1st period they found themselves down 1-0 to the visitors after giving up a power play goal on the 5 on 3.  They were also unable to take advantage of three straight power plays to end the 1st period.  Credit to Stockton goalie Tyler Parsons who really kept his team in the game in that opening period of play stopping all 14 shots he faced.

After Moose captain Peter Stoykewych tied the game early in the 2nd off a nice pass by Mason Appleton the wheels completely fell off for Manitoba.  They gave up five straight goals and just didn’t look like the same team we’ve become accustomed to watching.  When the Heat got their fifth goal of the game that was enough for bench boss Pascal Vincent to pull goalie Mikhail Berdin from the game.

The 3rd period some some more shenanigans and despite a goal by Seth Griffith on the power play this one was never in doubt. 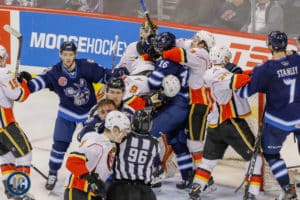 The Moose saluted their fans despite the loss and gave away sticks to conclude Fan Appreciation Day.  Over 8200 in attendance for the home season finale.

That was just the third regulation loss by the Moose in their last 24 games at Bell MTS Place.

The Moose will be in recovery mode on Monday and then will likely hit the ice for practice on Tuesday as they get set to play the final three regular season games on the road.  They will begin next Friday in Grand Rapids.