Recap of the Moose and Condors game.

Moose came into the final regular season homestand after finishing off their recent road trip 3-1-1-0 and sitting just two points back of the fourth and final playoff spot in the Central.  Tonight would prove to be a tough test as the Condors come into the game as one of the hottest teams in the AHL.

Coach Vincent in his comments following morning skate indicated that Tucker Poolman and JC Lipon are both out week-to-week.  A tough loss for the team as each player plays a significant role on this squad.

– Moose showed up on time (as the coach likes to say) and had some early chances.
– Three power play opportunities in a row for Manitoba in the 1st although the Condors held edge in shots.
– Seth Griffith opened the scoring on the power play to give the Moose a 1-0 lead after 20.
– One thing is certain: Mikhail Berdin is unorthodox.
– Another thing is certain: He is fun to watch.
– At one point Moose were being outshot 17-5 but maintained a 1-0 edge.
– A Logan Shaw slap shot gave the Moose a second pp goal of the game and a 2-0 lead.
– Moose killed a second 5 on 3 (although this one was for a full two minutes) in the 3rd.
– Best chance on it however went to Moose forward Felix Girard who had a breakaway.
– After Girard hit the post the Condors scored off their 31st shot of the game.
– Mason Appleton drew a late penalty and then scored on the power play into the empty net to seal the deal.

Massive 3-1 win for the Moose to kick off the final homestand of the regular season as they improve to 35-28-5-2. This team was DEAD LAST at Christmas and now they are back in a playoff spot. Dear Mama.

Worth noting that a big part of the reason for this Moose run has been their play at home. They’ve gone 17-2-1-1 in the last 21 games at Bell MTS Place. Three more home games left in regular season. And it is expected to be a BIG crowd on hand tomorrow. 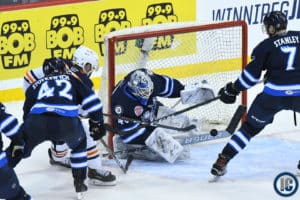 The Moose and Condors will have a re-match tomorrow night at Bell MTS Place.  Puck drop is at 7 pm.