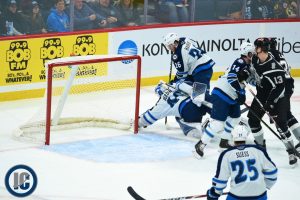 The Moose came into tonight’s game having won four straight games and six of their last seven contests.

The story during this Moose run has been the play of goalie Mikhail Berdin who has been on quite the run.  The four-game Moose win streak coincided with his play and that is good because the team would need him to be next level as San Antonio outshot Manitoba 20-6 in the 1st period of play.  They tried to impose their will physically on the Moose and targeted Andrei Chibisov who is no slouch when it comes to physical play.  Despite the shot edge neither team could score in the opening 20 minutes.

The aforementioned Andrei Chibisov opened the scoring late in the 2nd when he completed the tic-tac-toe play that was begun by Seth Griffith and then facilitated by Jansen Harkins whose hot streak continues.  Not much later (under two minutes) the Rampage tied things up when they scored with Sami Niku in the penalty box.  It was the first power-play goal that Manitoba had given up in 23 chances against.  They were still outshot by a 2:1 margin 12 to 6 in the middle frame.

The 3rd period was more even but neither side could solve the opposing goalie and OT would be necessary.  Kristian Vesalainen pulled a fantastic move in the San Antonio zone which resulted in a Moose power play.  And that’s how this one would end as Seth Griffith took the Andrei Chibisov pass and ripped it past Ville Husso to give Manitoba a 2-1 win over San Antonio.

The win was the fifth game in a row and seventh win in last eight games to improve the local AHL squad to 8-8-0-0 which is impressive when you consider they were 1-7-0-0 after the first eight games of the season.

The Moose will practice tomorrow at 12 noon at the arena as they get ready to complete their homestand with a re-match against the Rampage.