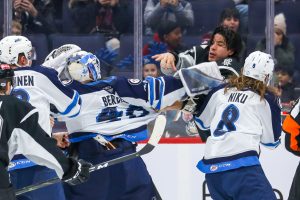 The Moose came into today’s action looking for a win in their final home contest for some time as they will be on the road for the next few weeks.

A pretty quiet opening period of play between the Moose and Rampage.  About the only significant events were the fact that Jansen Harkins and JC Lipon both briefly left the game although as I indicated it was brief and both returned the shift following their injury.  Most exciting part of the 1st was Mikhail Berdin deciding to fight Jordan Nolan who crashed the net and brought on the netminder’s displeasure.  Neither team would score in the 1st and shots were 10-9 for San Antonio.

Mike Vecchione opened the scoring for the Rampage as he ripped a shot that deflected off the foot of Moose defenceman Cam Schilling early in the middle frame. Cole Maier would score his second goal of the season to tie the game off a beauty play shorthanded set up by JC Lipon who with the assist achieved his 200th AHL point.  But unluckily for Manitoba 21 seconds later the Rampage would retake the lead when Nelson Nogier tried to clear the puck and it hit off the Moose forward to make it a 2-1 game for the visitors.  Seth Grifith took a puck to the mouth and left the game (and did not return).  The Moose never say quit and Jansen Harkins got the puck to Andrei Chibisov who scored with 0.7 seconds left to tie the game at 2.

Early in the 3rd Cole Maier would put home an excellent play of Leon Gawanke to give him the multi-goal game for the first time since he turned pro.  About ten minutes later Kristian Vesalainen scored what was a nice play to get into position but perhaps not the goal itself which went off the Rampage defender and past Ville Husso to make it a 4-2 game.  The Rampage had a chance to get within one but Jordan Nolan just couldn’t finish off the play and shortly thereafter Leon Gawanke scored his first pro goal as he deposited it into the empty net to make it a 5-2 game.

Moose win their sixth game in a row and eighth win in last nine games to improve to 9-8-0-0.

Coach Vincent indicated that Logan Stanley will be on the trip with the Moose and he expects him to be a player on the road.  He has been out since end of October.

The Moose will practice tomorrow in Winnipeg before they get ready to head out on the road for seven games.