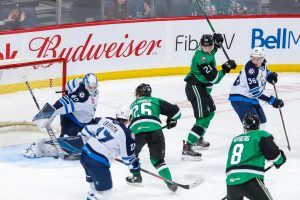 The Moose came into today’s game having won three straight games and five of their last six contests.

The Stars are a desperate team as they entered the game 0-7-0-1 in their last eight games so you could see right from puck drop that they wanted to get a win.  They jumped on the Moose early and held a shot lead which was increased when they had a 5 on 3 man advantage.  However the Mikhail Berdin continued to play stellar stopping all 10 shots the visitors would take in the opening period.  Kristian Vesalainen would score his second goal of the season on a power play late in the 1st period on a nice pass from Sami Niku.  Jansen Harkins, who has been on a hot streak, picked up the secondary assist.

The Stars ate their Wheaties between periods as they meant business in the middle frame. They finally beat Berdin approaching the midpoint of the 2nd on a screen that the netminder had little chance of stopping. Cole Maier deserves a lot of credit as he drove into the Stars zone about a minute and a half after they had tied the game, did some heavy lifting in the corner and then got the puck to Emile Poirier who put home the pass to held the home side re-gain the one goal edge. The Moose were outshot 15-5 in the 2nd.

The final frame would see Texas throw everything but the kitchen sink at Berdin to try to tie the game up but despite outshooting Manitoba 12-1 they couldn’t beat the Birdman and the Moose would hold on for the 2-1 victory.

The win means they’ve won four straight games and six of their last seven contests. They improve to 7-8-0-0 on the season and sit just two points back of San Antonio who are in 3rd place in the Central and who they will face this weekend here in Winnipeg.

Sami Niku confirmed that his move to the left side had to do with allowing guys who play right side to get into lineup.

Post-game Niku indicated “I really don’t care what side I play. Both sides are fine. It’s fun to play on the left side sometimes.” https://t.co/bMnVBDsIfu

I asked Kristian Vesalainen post-game if he called for the pass from Sami Niku in Finnish or English on his power play goal.

Without missing a beat he smiled and said “Finnish. 100% Finnish.” followed by a chuckle.pic.twitter.com/1i9qYS4NvV

The Moose will practice tomorrow at 12 noon at the arena as they get ready to face the Rampage for a pair of games here in Winnipeg to finish off the homestand starting with a game on Friday night.