Should the Winnipeg Jets expand or change their leadership group?

Who could you see wearing a letter in the future?

“I think within that room, you guys see the outward leadership of someone wearing a letter.  Within that room there’s lots of players that actually take on leadership roles and it comes with respect to the relationships and what those players earn. There’s always a saying ‘you don’t need a letter to be a leader’ and whether in the future we make changes or that, that is certainly not something we are contemplating here today to move and discuss.”  So said Jets general manager Kevin Cheveldayoff when asked on the final day of exit interviews as to whether the Jets would consider formally expanding their leadership group which currently consists of Blake Wheeler, Dustin Byfuglien and Mark Scheifele. 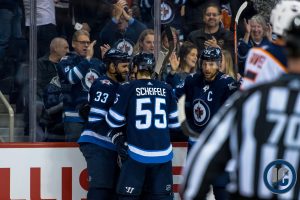 The talk about team leadership was a theme we heard quite a bit about during exit interviews following the Jets first round exit against the Blues.

But why was this a topic of conversation in the first place?  Perhaps it had to do with the fact that alternate captain Dustin Byfuglien had skipped out on the final day of player interviews.

In addition to the on ice responsibilities the guys wearing a letter are generally the players most often tasked with chatting with us in the media after a practice, before/after a game, etc.  While Dustin Byfuglien is probably the most liked Jets player among the fan base he enjoys media scrums as much as most people enjoy getting a root canal.  During the 2018-19 season he spoke on camera (as available on the Jets site) approximately 13 times (although it should be noted that he did miss 40 games this past season).  But when you consider that captain Blake Wheeler spoke on camera approximately 106 times while the Jets other alternate captain Mark Scheifele spoke approximately 70 times on camera last season, that is a fairly significant disparity throughout the course of the 2018-19 season (even if you extrapolate Byfuglien’s interviews for a full season) among the three.

One player who seems to be frequently mentioned as someone who can assume a leadership role with the Jets is Josh Morrissey.  In fact when Mike McIntyre of the Winnipeg Free Press asked Kevin Cheveldayoff the question which elicited the response which opened this piece he was specifically referencing the Jets top pairing D man.  While not in a formal leadership role Josh Morrissey spoke on camera during the season approximately 44 times (and it should be noted that he missed 23 games due to injury). 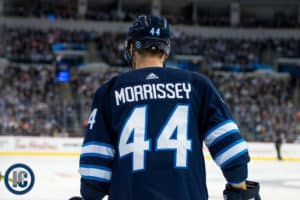 By my count the on camera appearances by some of the other young players on the Jets were approximately:

Earlier in his availability Cheveldayoff had been asked about young players assuming leadership roles and when referencing Morrissey indicated “Josh is an extremely important part of this team moving forward here.  We talked about leadership with him.  He’s been a captain wherever he’s played.  He’s a well respected guy.  He plays big minutes.  He plays hard minutes.”.

Josh Morrissey is an articulate young man with a solid disposition, someone who plays a significant role on this team, has the respect of his fellow players (rookies/veterans) as well as the coaching staff and has a good working relationship with the media.  It wouldn’t be a shock to see him wearing an A on his Jets uniform sooner rather than later.

What do you think?  Do you think the Jets will make a change?  Or should they simply expand their leadership group to help diffuse some of the responsibilities that come with playing in a Canadian market?  And if you do see a player being added which do you see as the most likely to be wearing a letter for the Winnipeg Jets?