The 2021 regular season for the Manitoba Moose got going tonight as they finally got things underway here in Winnipeg as they welcomed the Toronto Marlies to town for four straight games. 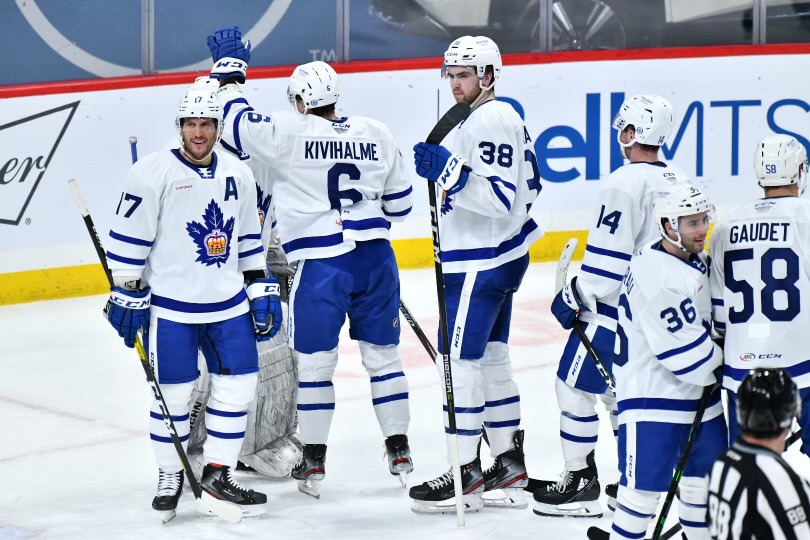 Maybe my prediction about Declan Chisholm wasn’t too bold.

Well looks like it’s gonna be a night of firsts.

Save of the Year candidate:

Here was that “save of the year” candidate from Mikhail Berdin. pic.twitter.com/qvACEM6IoC

Cole Perfetti – Very smart young man whose vision is clear.  Hasn’t played a game since the World Juniors but you can see the calculation on the ice.  Knows where to be and will be a quick study at this level.

Dylan Samberg – He was playing on the right side, which he indicated post-game he feels comfortable doing.  Considering he hasn’t played a game since March of 2020 when he was playing in the NCAA, he looked very good paired up with fellow prospect Ville Heinola.

Ville Heinola – Smooth skating and calm, cool and collected with the puck. The 2019 1st rounder will benefit from playing big minutes in these games.

Declan Chisholm – I joked after his first shift that the Jets 2018 5th rounder was one player to keep an eye on and then nine minutes later he scored his first pro goal in his first pro game.  Calm with the puck in his end he consistently made a good first pass.

Johhny Kovacevic – When I spoke with him in December it was evident that the second year pro was champing at the bit to get back on the ice and the Jets 2017 3rd rounder made a nice play setting up the Chisholm goal and looked good considering he hasn’t played a pro game since March of last year.

Leon Gawanke – Another second year pro for the Moose is Jets 2017 5th rounder who was playing in the German DEL before returning to Canada to quarantine ahead of the AHL season.  He was last year’s points leader for Dmen on Manitoba and you could see flashes of that game from him tonight.  And he even added some pugilism mixing it up in the 3rd period.

The Moose and Marlies will be right back at it tomorrow night.

Report: Manitoba Moose to play remainder of season (after February) at Iceplex
Marlies use a strong second period to roll over the Moose 6-2