The Moose returned home after an 8-game road trip which saw them go 0-5-2-1. And while it’s normally a pleasant thing for a team to return home, they were facing the AHL’s most dominant and high scoring club – the Toronto Marlies – who have outscored the Moose 27-7 on the season. 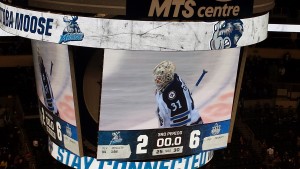 On the PP in the first, Marlies d-man T.J Brennan took a nice feed from Brendan Leipsic, and quickly one-timed it top shelf on Eric Comrie, putting the Marlies up 1-0.

Minutes later, Connor Brown appeared to have the Marlies’ second goal of the game on a rebound, but the referee suggested there was incidental contact on the goaltender, and the goal was waived off.

Still in the first, the Marlies attacked the Moose zone with speed off the rush, and a nice feed from Josh Leivo sent Mark Arcobello in all alone. He slid the puck past Comrie’s right bad, putting the Marlies up 2-0.

After the first, the Marlies were controlling play, and up 2-0

Off a seemingly harmless play near the goal line, Nic Petan rang a quick shot off the crossbar halfway through the second, which would have gotten the Moose back within 1.

Shortly thereafter, Nikita Soshnikov took a nice pass from Zack Hyman, and released a quick wrister from the slot which beat Eric Comrie high glove, putting the Marlies up 3-0.

Just under 2 minutes later, a puck came ricochet off the right boards to Mark Arcobello, who blasted a one-timer from the right faceoff dot, surprising Eric Comrie and beating him high blocker. 4-0 Marlies.

Still in the second, the Marlies came in two-on-one and Kaperi Kapanen received a nice pass from William Nylander, and snapped it home to give the Marlies a commanding 5-0 lead.

The Marlies led 5-0 after two

A few minutes into the third, Marlies’ goaltender Antoine Bibeau was upended by his own defenceman, and Nic Petan found the puck in front of the net, spun, and backhanded the puck into the empty net, putting the Moose on the board, but still down 5-1.

With a few minutes left in the third, John Albert made a tricky backhand pass from behind the net to Jiri Fronk, who beat a surprised Bibeau, to make the score more respectable at 5-2.

The Moose got a powerplay and also pulled their goalie, and were able to apply great pressure in the Marlies’ end, but Zack Hyman was able to pot an empty-net goal to end the rally. 6-2 Marlies.

The duo of Nic Petan and Scott Kosmachuk had a bit of jump, and created some scoring chances, including the team’s only goal. Apart from that, there was nothing positive to take from this game.

With the recent return of winger Thomas Raffl, the Moose are almost completed healthy. The only exception is Jay Harrison, who was injured on the most recent road trip. Harrison is out indefinitely.