Recap of the Moose OT win over the Marlies. 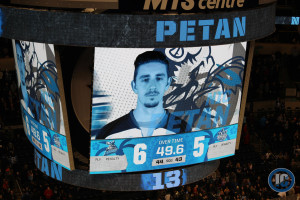 The Moose have had their collective clocks cleaned by the Toronto Marlies throughout the season having played seven times already and been outscored 33-9 heading into the game this afternoon.  The Moose showed some resilience as they easily could have folded up shop going down 3-1 to the best team in the AHL.  Instead they dug deep and made quite the game against a team that was 48 points ahead of them in the standings.

Eric Comrie: continues to display a poise and skill level that seems unusual in someone so young.  He made some key saves with his team already facing a deficit and held the Moose in the game.  He faced 43 shots and made 38 saves.

Chase De Leo:  Plays with a real zest for the game.  Really doesn’t take any shifts off and today was no exception. Got the game started with a goal just 47 seconds into the 1st and then scored again on the power play early in the 3rd period to give Manitoba a 4-3 lead.

JC Lipon:  His first period slashing penalty resulted in the Marlies getting back into the game after a hot start for the Moose but he continued to play a really tough, physical game and ended his night with one goal and four assists. Given the flak jacket by his teammates for post game interviews.

Nic Petan:  Continues to show off his play making ability and while usually he is the one dishing the puck tonight he finished off 3 on 3 OT with a very nice display of hands to put it home from in tight.