After three more losses last week – 6-3, 6-2, and 4-0 – the Moose now sit dead last in the AHL with a record of 11-25-3-4. They’ve lost 8 games in a row, have scored the fewest goals in the league with 85, and allowed the third most in the league (146). There’s no other way to say this: the season has been a disaster. There have been very few games this season where the Moose have been the better team on the ice, and if not for great goaltending, they might only have a handful of wins on the season. For fans of hockey in Manitoba, the big question is, how much does this matter? Does this mean that the Winnipeg Jets’ franchise doesn’t have a bright future? 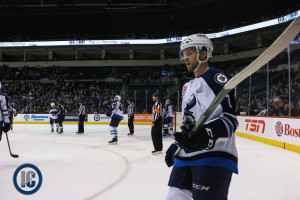 I think the answer to that question is a resounding no. Despite their record, there is some young talent on this roster – Comrie, De Leo, Petan, Morrissey, Lipon, Fronk, and others. In fact, the really good news is that the young players just mentioned have been among the most productive and consistent players on the team. The reason the Moose aren’t doing well is because their veterans have either been hurt – like Raffl and Harrison – have underperformed – Cormier, Halischuk, and MacWilliam – or a mix of both – Albert and Fraser. The biggest concern is how a losing season affects the long-term development of those key young players. Losing can be de-motivating, especially for guys like Petan and Morrissey, who have grown very accustomed to winning. However, adversity is also a great test of character, one that guys like Comrie and De Leo are passing with flying colours, as they seem to thrive regardless of the situation.

2) Eric Comrie is an All-Star

Speaking of Eric Comrie, he has been the biggest bright spot for the Moose this season. Comrie made his all-star debut at the AHL skills competition on Sunday, and was named the top goaltender, helping the Western Conference to a 19-14 win. While the stats may not show it, this 20-year-old has been between good and great for almost the entire season, which is a tremendous accomplishment for a rookie goaltender playing on a decidedly weak team. With everyone in Winnipeg abuzz due to the play of Connor Hellebuyck, Comrie takes a back-seat in the conversation of “goaltender of the future”, but in the time that Hellebuyck was with the Moose, he wasn’t quite as impressive as Comrie, despite being two years older, and in his second professional season. Assuming Ondrej Pavelec plays out his contract with the Jets, that will give Comrie one more year in the AHL. That could make him as the Jets’ back-up at age 22, while Hellebuyck would be 24 – an impressive young tandem which the Jets could ride for years to come.

(3) Is Kyle Connor the best player in the NCAA?

Jets prospect Kyle Connor is dominating US College hockey. He is leading the nation in scoring, with 42 points in just 23 games, and his game splits are ridiculous: he had a good start to his freshman year, with 5 goals and 12 points in his first 11 games, but since then, he has gone ballistic, scoring 15 goals, and adding  15 assists for 30 points, all in the last 12 games. He draws some comparison to Detroit Red Wings’ super-rookie, Dylan Larkin, another American player who posted impressive stats in his rookie season (47 points in 35 games), playing for the same College (University of Michigan), drafted in roughly the same spot (15th in 2014; Connor was 17th in 2016), and is roughly the same size and stature (6’1, 190, though Larkin is a bit more physically mature). While it’s not a fair comparison in terms of style, what’s really impressive is that Connor’s current point pace is actually better than Jack Eichel’s was last year; Eichel had 71 points in 40 games (1.77 points-per-game), while Connor is currently averaging 1.82 points-per-game. Remember that Eichel won the Hobey Baker award as the best player in College Hockey, the first freshman to do so since Paul Kariya, back in 1993. Is Connor keeps this up, he will likely win the Hobey too, and if he does that, you can probably expect him to sign a contract with the Jets in the spring, and possibly be in their lineup next fall.

Note: Twenty is a typical age for first round picks to turn pro coming out of college – Connor turns 20 in December.