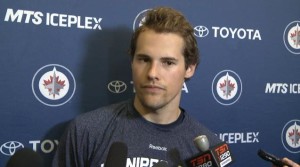 With Jacob Trouba suspended two games for his hit on Mark Stone expectations are the Jets will likely recall a defenceman up from the Moose.  It would appear that in anticipation of that move the Moose have gone local signing Nolan Zajac to a professional tryout agreement.

For fans who remember Zajac was invited to Jets Development Camp back in 2014 although that obviously didn’t result in anything with the organization.  Jeff wrote a good article about him back then which you can read here.

Zajac, 24, is in his first professional season, playing 49 games for the Toledo Walleye (ECHL) while posting 41 points (9G, 32A).  The Winnipeg, MB native is sixth in ECHL rookie scoring and fourth among defencemen in points and assists. Zajac also has one assist in three AHL games with the Hershey Bears this season.  Prior to his professional career, the 5’11, 180 lbs defender played four seasons at the University of Denver (NCHC) from 2012-2016, totaling 95 points (19G, 76A) in 160 NCAA games.  Zajac participated in Winnipeg Jets Development Camp in 2014.

The Manitoba Moose return to home ice for the first time since Feb. 4 on Tuesday night when they host the Rockford IceHogs.  Tickets for the 7 p.m. CT matchup are available at moosehockey.com/tickets.