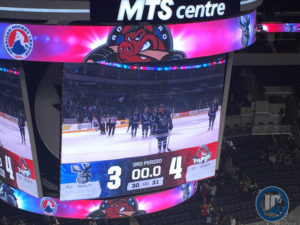 As Laine and Matthews faced off at the ACC in Toronto, the Manitoba Moose took on Chicago’s AHL affiliate, the Rockford Ice Hogs. After getting down 2-0 in the first, the Moose roared back in the second, scoring two goals in 1:35 to start the period. The Ice Hogs took back their two-goal lead in the third, going up 4-2, but the Moose made it interesting, scoring a short-handed goal with just over 5 minutes left in the third. They weren’t able to get any closer, as they looked disorganized in the final minutes of play.

After the game, Moose Head Coach Pascal Vincent didn’t sugar things, saying that he didn’t like the team’s first period at all, and suggested the team was tired following a 6-game road trip. Asked about goaltender Eric Comrie’s play, he called it “ok – like the rest of the team”.

Ice Hog Goal (1): On the PP, Brandon Mashinter found a rebound in the slot and beat Comrie.

Ice Hog Goal (2): Off the rush, the Moose chased the Ice Hogs into the corner, and Mashinter had oodles of time in front to collect yet another rebound in the slot and beat Comrie over the right pad.

Moose Goal (2): Quinton Howden found Scott Glennie in the slot, and he one-timed it just just over the pad to tie the game at 2.

Ice Hog Goal (3): Kyle Baun circled the zone and came into the slot and took a weak wrister which found its way through Comrie.

Moose Goal (3): While shorthanded, Brian Strait made a nice move to enter the offensive zone, came up to the faceoff dot and half-fanned on a shot which beat Jeff Glass five-hole.

Winnipegger Nolan Zajac scored with his first career AHL goal when he jumped into the rush and escaped the backcheck. The undersized d-man (5’9) brings good skill and offensive instincts, and has some similarities to Moose centre Dan DeSalvo – both are undersized 24-year old’s who turned heads in the ECHL before joining the Moose lineup.

J.C Lipon was the most noticeable Moose forward tonight, skating and carrying the puck well, making plays, and battling hard as always. Offensively, he’s had a tough year, with just 5 goals and 16 points in 51 games coming into tonight.

Eric Comrie had a forgettable night – although he was excellent in the second period, he gave up some big rebounds in the early going which put the team down 2-0, and sapped the team’s momentum when he gave up a very weak third goal to put the team down 3-2. He was starting his 7th straight game, so perhaps fatigue is playing a role.

Kyle Connor and Jack Roslovic had similar games – each of them carried the puck a lot, but ineffectively; they didn’t create many, or capitalize on any scoring chances, and appeared to be doing  too much on their own with the Moose down in the third.

Brendan Lemieux was also silent tonight – just one shot on goalie (not a quality chance), and a minor penalty which led to Rockford’s opening goal.