A look at the Moose practice today at the IcePlex.

Following a day off on Sunday the high-flying Manitoba Moose were back on the ice this morning at the IcePlex as they ride a 10-0-0-1 record in their last 11 games and sit first in the Western Conference (second overall in the AHL).

Goalies Eric Comrie and Jamie Phillips were on the ice fifteen minutes before practice began working through drills with goalie coach Rich St Croix.  Michael Hutchinson wasn’t on the ice as he continues to work his way back from the lower-body injury he suffered in the shootout on Saturday. 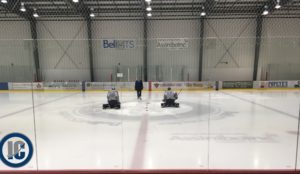 When the rest of the team joined the goalies on the ice it was a full house as the Moose had five lines running which featured the usual trios:

And D pairs were the same as well although Jake Kulevich was wearing a yellow non-contact uniform:

Maclise gets a new deal:

Last week forward Cam Maclise was released from his 25 game PTO and signed to an AHL deal with Manitoba.  The Lacombe, Alberta native seems to have found his groove playing on the wing with a couple of Jets prospects in Jansen Harkins (2015 2nd rounder) and Michael Spacek (2015 4th rounder) contributing three goals and two assists in 18 games this season.   Following practice I asked him what it meant to get the contract from the Moose.  “It’s big for me.  Something I have been working towards for a long time.  A little bit of relief and little bit of excitement at the same time.”  He spent last year with Mount Royal University Cougars of the Canada West Universities Athletic Association before joining the Colorado Eagles of the ECHL for their championship run.

Following skate I spoke with coach Vincent to get an update on some of the injured players.

Defenceman Jake Kulevich missed almost a month of the season before getting back into the lineup, playing in three games for the Moose, but was injured on November 21st against Laval.  Today, he was wearing a yellow non-contact uniform on the ice.  “We were hoping for this weekend but that was hoping that everything goes right and it’s going in the right direction but he’s not gonna be ready.  So we think when we come back here against San Antonio.”.

Another injured defenceman is Nelson Nogier, who suffered a significant injury in the first shift of the first exhibition game this season in North Dakota.  Back in October we were expecting this to be a four to six month recovery for the young defenceman.  “Right now the plan is March, at some point in mid March.  It’s going a bit faster but we need to be careful there so mid March I would say.”

Last up was goalie Michael Hutchinson who was injured on Saturday.  Unlike the previous two players Coach Vincent had good news for his squad on this front indicating that the Moose goalie “should be good to go next weekend.”.

Coach Vincent spoke about the return of Jets 2013 2nd round pick Eric Comrie from the big club and what he means to this team.  “What we see on the ice with Eric is a really good reflection of who he is as a person.  Hard-working guy, great teammate, will push himself and by doing that he’s pushing the team.  It’s not only his talent and what he brings on the ice, but it’s also around the team.  He is a leader on that team.”

I asked the Moose bench boss what his philosophy is for keeping his first place in the Western Conference Moose team grounded. “We keep the focus on the process and the details of the game.  Winning the small battles, winning the practices, making sure we’re ready on time for practices.  We stay in the moment as much as we can.”  He added “I’ve said this quite a few times, you’re never as good as you think you are and when things are not going well, you’re never as bad as you think they are, so it’s keeping an even-keel kind of attitude.”  He does, however, like the confidence his team is displaying this season “I like the confidence.  We’re right up there because we deserve to be there and we’ve done a lot of good things and those guys have been working hard, playing the right way and it feels good to be there.”

Moose return to practice on Wednesday at the IcePlex as they get ready for three games in three days starting Friday in Belleville against the Senators farm club.