Recap from the Moose game. 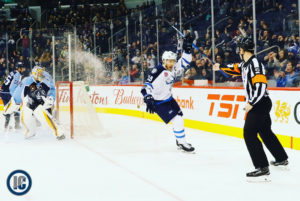 Pre-game warm up saw Jamie Phillips leading the team out onto the ice as he was today’s starter with the news that Michael Hutchinson was ailing (from an injury he suffered in the shootout yesterday) and would use former Bison goalie Steve Christie as the emergency backup.

Buddy Robinson brought the same energy he had in yesterday’s contest to today’s action and opened things up with a great chance in tight on Admirals goalie Juuse Saros but the Milwaukee goalie made the save.  A few minutes later the visitors had a 2 on 1 which they deposited behind Jamie Phillips for the early 1-0 lead.  Manitoba did outshoot Milwaukee in the opening period 13-10 but couldn’t solve Saros.

Middle frame was a different animal however as the home side playing in front of 8200 fans on Star Wars day here at Bell MTS Place scored three unanswered goals while pouring on 22 shots (to the 13 taken by the Admirals).  Goals by JC Lipon (8th), Patrice Cormier (8th, SH) and Mike Sgarbossa (9th) would allow the home side to comfortable finish off the 2nd with a lead.

The 3rd was a continuation of the 2nd it would seem as Brendan Lemieux (originally credited to Cameron Schilling) set up a perfect screen in front of Saros and tipped home his seventh to make it a 4-1 game.  Then five minutes later Patrice Cormier took a no-look Buddy Robinson pass to get his second of the game, giving the Moose a 5-1 lead.  And then Chase De Leo, who already had two assists, took his rebound around the Admirals net for his sixth of the season which made it a 6-1 game.

Friday, December 15th in Belleville as they kick off a three-game road trip.