High above the ice surface at Bell MTS Place I was in my usual perch in the press box watching a recent Moose game when the stick of one of the Manitoba players snapped.  When the play was whistled dead he returned to the bench in order to select a new twig.  He eyeballed the stick given to him and selected one to use during his next shift.

When I went to the Bell MTS IcePlex a few days later to watch the Moose practice I had the opportunity to discuss the subject of sticks, blade curves and what it means to have personalized gear with some of the players.   Coincidentally, CCM pro rep Todd Duffin happened to be in attendance that morning to outfit some of the Manitoba players with new gear and was able to provide some additional insight.

CCM has an exclusive partnership in place in the AHL (which was extended by five years in 2016) whereby they supply all sticks, helmets, gloves, pants and jerseys to players in the league.  A few of the veteran players have the option to use something other than CCM.

Most players are quite specific about their sticks and curves.  Duffin expanded on this indicating “Every player in that room is going to be a little bit different.  Some guys are very tech and spec on their sticks and what they use.  There are some modifications when guys talk about their blade maybe being a little too soft, they want something with a little more harder feel.  The flex points not right for their shot profile, whether it’s a one timer, snap shot, wrist shot, in close.  We have different profiles and flexes that will cater to those certain players.”

In terms of how specific players can be with their sticks Todd told me that it runs the gamut including “from lengths of their sticks to shaft geometry (how thick the shaft is going to be or a more round style shaft), blade height, blade length, curves (for shot style), etc.” Ultimately from Todd’s perspective “It’s important to communicate with the player to figure out what he wants and then trying to work together to match those specifications.”.

After talking with the expert I touched based with four Jets prospects (Chase De Leo, Jack Roslovic, Nic Petan and Mason Appleton) about their sticks, blade curves and what it means to have personalized gear.

Chase De Leo (Jets 2014 4th rounder) used an Easton stick growing up but switched over to Bauer when he joined the Portland Winterhawks of the WHL.  While still in junior hockey he made the switch over to CCM.  De Leo uses a “tall blade” which is three inches tall, bigger than the normal blade as he felt “it helped in the face off circle, gave me more area to get the puck.” 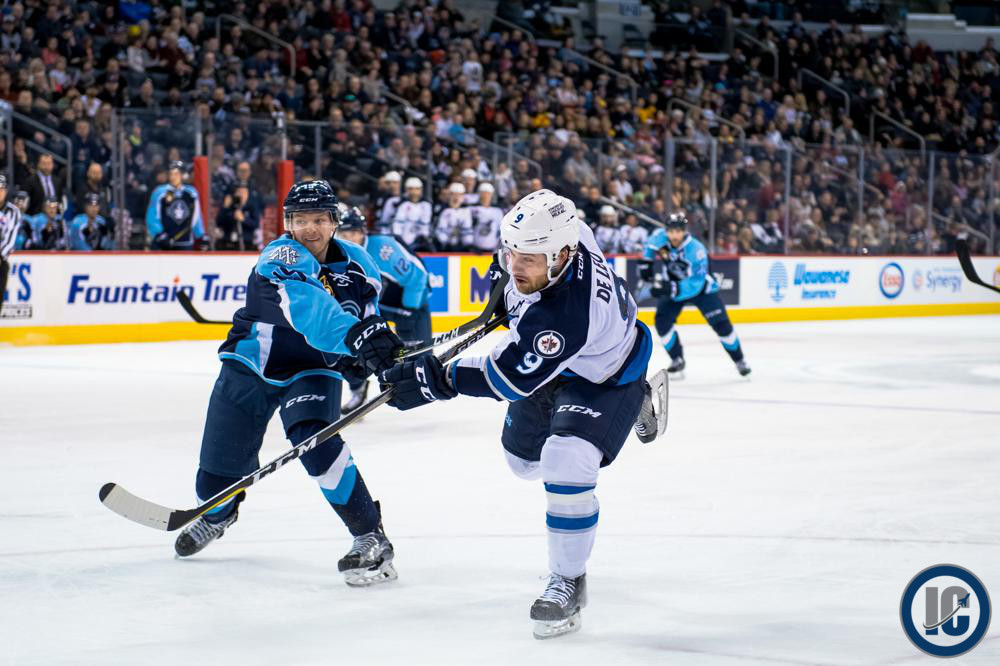 I asked him whose stick he used when he was younger “Joe Sakic. I had this VHS tape when they won the cup with Forsberg and Roy and those guys and I just loved that stick.”  When I asked him what it is like seeing his name on the stick and what it means to him “When I was little I had my mom and dad print up stickers to put my name on my sticks.  So it’s cool to see my name on it.”

One player who hasn’t changed his curve much in the last few years is top scoring forward Jack Roslovic (Jets 2015 1st rounder) who told me “in U-17 (U.S. National Under-17  team) when I first started playing for the U.S. program I created my own curve with CCM and from there I don’t think I’ve ever switched”.  Considering he is near the lead for the AHL scoring title something tells me he won’t be switching that curve anytime soon. 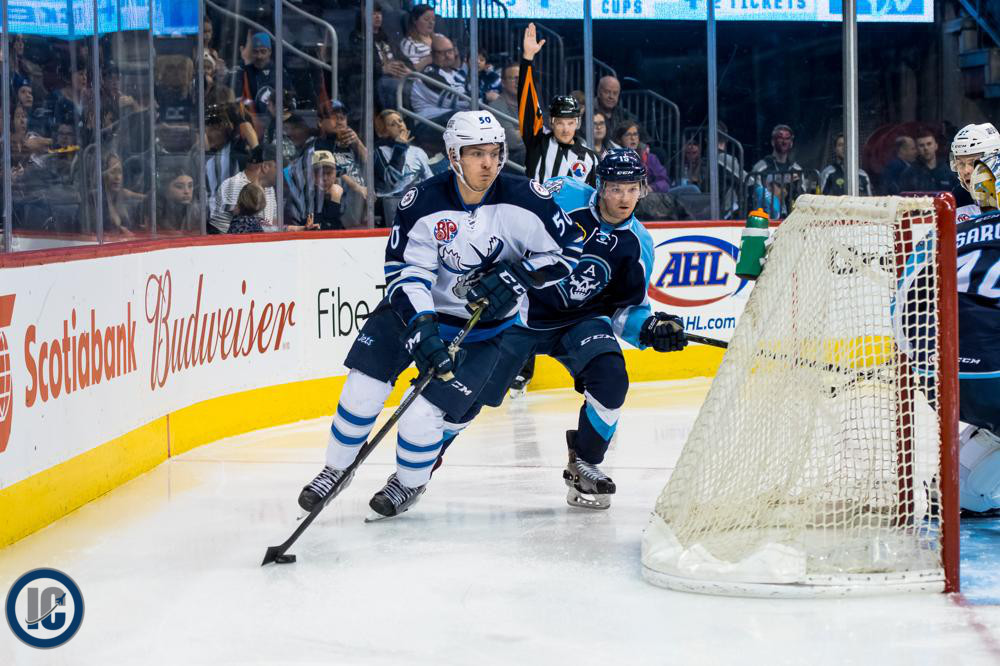 When asked what players sticks he gravitated towards when he was younger, one of the two was somewhat surprising.  “There were two favourites” said Roslovic on sticks he got when he was a fan sitting in his family’s season tickets in Nationwide Arena in Columbus, Ohio. “Rick Nash was one of my favourites and goalie Tomáš Vokoun.  I was a righty and I always liked using his stick in the house.  Kind of weird to play with a goalie stick but it was a right-handed one and I could stick handle with it.”.

Roslovic reflected back to when he was a kid using a program online to customize his stick “to have my own name on it” and how it compares to his present reality where he has customized sticks by CCM admitting, “it’s a pretty cool feeling”.

When he was in peewee and bantam hockey dynamic forward Nic Petan (Jets 2013 2nd rounder) used an Easton stick with the Jarome Iginla curve.  Once he got started in junior hockey with the Portland Winterhawks he switched over to using Bauer.  At age 17, he and fellow Winterhawk (and Winnipegger) Brendan Leipsic switched up the pattern they were using, to more of a straight curve which he kept until he was 20.  After a brief change he went back to using a more straight curve, something he acknowledges, makes him fairly unique on the team.  “I think I’m the only guy who uses a straight curve on the team, it’s kinda weird, they all chirp me for it, but straight curves are the best curves.”  With 16 assists in 22 games this season he may be onto something. 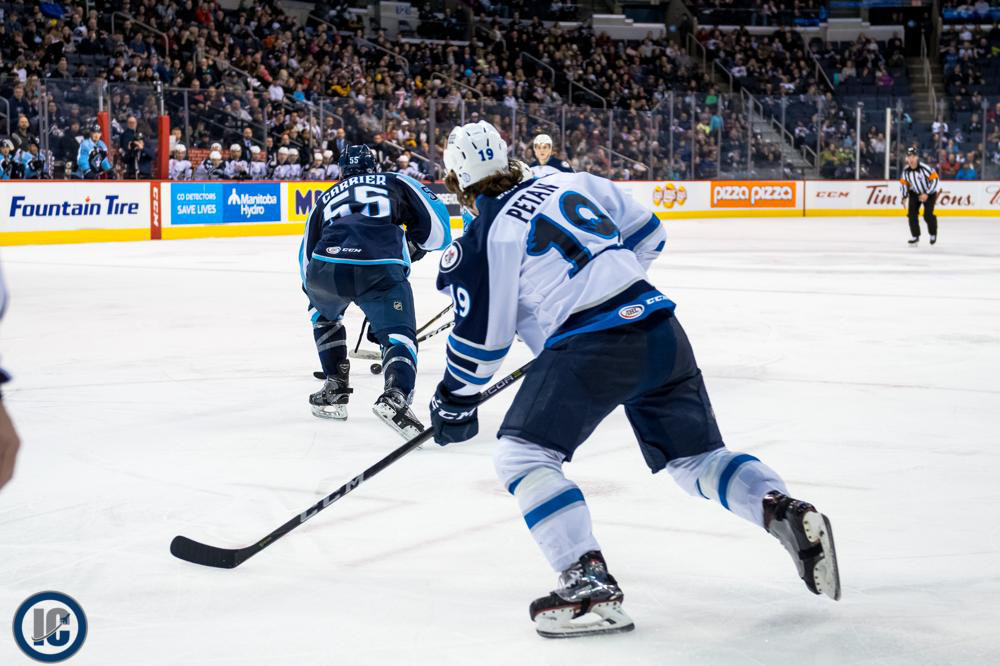 Rookie Manitoba forward Mason Appleton (Jets 2015 6th rounder) was a Bauer guy his entire life, until he got to junior hockey.  In the USHL they use CCM so he switched over to that brand when he was with the Tri-City Storm.  A year later he arrived in East Lansing, Michigan for college to join the Michigan State Spartans and he switched back to using Bauer.  When he got to Winnipeg to play for the Moose he went back to CCM and he’s currently using a Tacks stick with a Toews curve indicating “It’s a bigger curve than I’ve ever used in my life but I like shooting with that big curve and I feel like I can do other things with it.”  Clearly he has found something that works sitting second in the AHL rookie scoring race and tied for eighth overall in the league. 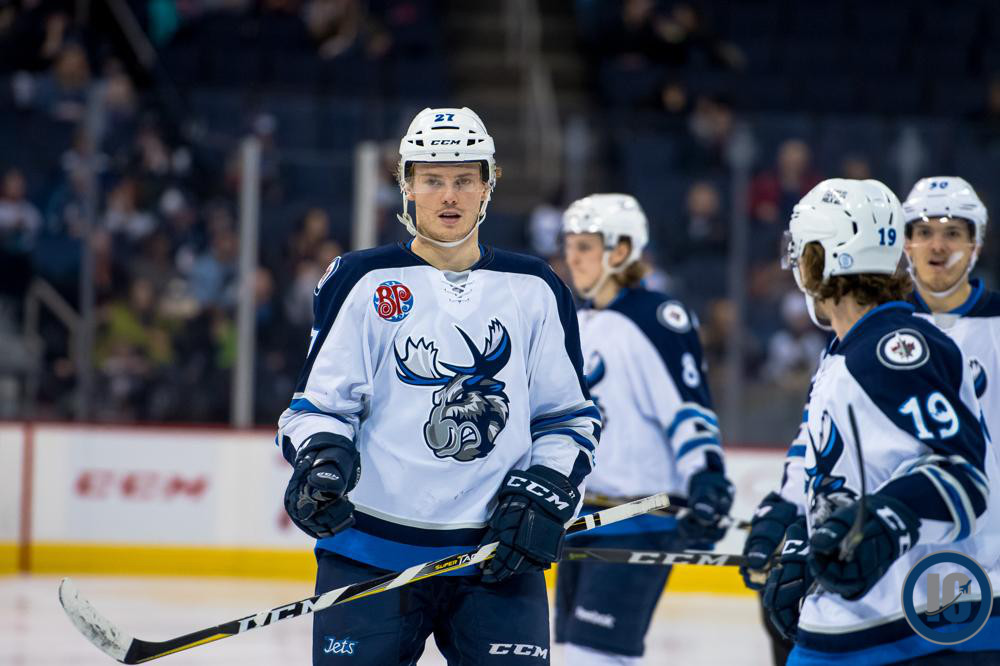 Often times when we think of players making the adjustment from college to the AHL we think in terms of the physicality, the speed, the greater number of games, etc. but there can also be a big change from the perspective of the equipment.  For Appleton there was an adjustment period “when I got here, there was a different feel for sure and I just tried to replicate the stick (he used in college) as much as I could.  It took a little bit to adjust to it but now I am definitely happy using the CCMs.  We’re always able to make changes here and there so that is really helpful as well.”.

When asked what it is like to see his name on his personalized stick “It is pretty special.  I know growing up when I would go through a locker room tour that was always one of the coolest parts for me was to see a guy’s stick, with his name on it.  When I went to juniors it was pretty surreal when I saw my name on a pack of six sticks.  You try not to take for granted all these little things we get here.  Like our customized sticks and all of our gear customized.  It is pretty cool to see your name on your stick and your stick designed exactly to fit you.”.

Unfortunately I didn’t remember to ask if any of these players if they have ever used an illegal curve…..