A look at the Moose prior to their departing on a three-game road trip. 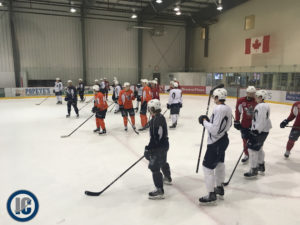 The Moose had Sunday off but took to the ice today at the IcePlex ahead of their three-game road trip this week.  They play in Belleville on Wednesday followed by a back-to-back in Laval on Friday and Saturday.  The Moose are actually out of town for nine road games total but the AHL All-Star break on January 28-29 in Utica, N.Y. will give the players not participating a few days off in between games three and game four on the road.

All healthy players were on the ice today and even some of those not quite at 100% joined their fellow players for a skate in orange non-contact uniforms including Buddy Robinson, JC Lipon and Francis Beauvillier.  Guys not on the ice include Chase De Leo, Peter Stoykewych as well as Nelson Nogier who is dealing with his long term injury recovery.

Following skate coach Vincent provided updates on his injured players.  Regarding second leading scorer Buddy Robinson he added “Buddy should be a player for our next game, as far as I know.”  With respect to JC Lipon, who last played January 5th and Francis Beauvillier, who left the game in the 2nd period against Texas on the 19th, the Moose coach expects both players to “hopefully (play) the weekend coming” when the team plays Laval.  Local product Peter Stoykewych last played on the 19th but was an injury scratch on Saturday, has been seen on crutches the last few days and was described by his coach as being “week-to-week”.  Chase De Leo, who also was hurt in the 2nd period of the game on the 19th against Texas, won’t be on the road trip with the Moose.

Staying out of the box:

While the Moose have had one of the top rated penalty kills for the entire season (currently 4th in the AHL) they have also shown a lack of discipline at times.  They have been shorthanded 194 times this season which puts them as the sixth most penalized team.  Coach Vincent acknowledges this is an area that they need to clean up “we took too many penalties, that is one thing we have to fix”.  Even when a team doesn’t score on the Moose we can see that this can suck the momentum away from the team and when you combine this with the fact that Manitoba is missing players who usually help kill penalties (Roslovic, Robinson) it isn’t a recipe for success.  Luckily for Manitoba they only have two more games against the Iowa Wild this season which has scored seven goals in 29 chances against the Moose this season which accounts for almost one quarter of the power play goals they have allowed.

Captain sees the positive from the upcoming road trip:

As illustrated above the Moose will play the next nine games away from Bell MTS Place but captain Patrice Cormier doesn’t see this as a disadvantage.  With the Moose having compiled a 14-4-1 record away from Winnipeg the road has been a good place for the top squad in the Western Conference.  Cormier saw his team “build a lot of chemistry in that first California trip.  I think that is where we started our first long winning streak.  We need to get on the road, spend some time together, joke around and kind of have some fun with it and hopefully we can get some wins.”  As to why the team has been so successful on the road this season the captain sees it as a function of the team “simplifying our game”.

JC Lipon has been out of the lineup since a game January 5th contest against the Chicago Wolves and he was back skating with the team today.  “It was fun, I felt good, still a little ways but I can shoot the puck now, so it’s good.”  Of course during this time that he has been out is when the team could have used him most with the recalls, injuries and suspension and the Saskatchewan product recognizes that he needs to be healthy to be an asset for this squad.  “When I come back I just want to make sure I am healthy and don’t re-activate it.”.  He has eight goals and 10 assists for 18 points in 34 games this season for the Moose.

Buddy is soaring high with his Eagles:

The good news for the Moose is that they can expect to have Buddy Robinson back in the lineup when they face his old team in Belleville on Wednesday.  He is back to feeling good and told us after practice that he “Feels fine now, ice was great, shooting, contact even as I was getting hit a little bit and it felt fine”.  Perhaps buoying his spirits was his Philadelphia Eagles making it to the Superbowl with a big win on Sunday over the Vikings “it was a good night last night.  I’m feeling pretty good about myself today with the Eagles going to the Superbowl”.  When asked about their chances to knock off Super Bowl favourite New England, the New Jersey native said “Love em.  Tom Brady who?”.

Following today’s skate the news broke that Brendan Lemieux would be trading in his coat that he would have needed for Belleville/Laval for a pair of flip flops as he had been recalled by the Jets for their two-game California road trip to San Jose/Anaheim.

The Moose leave for Belleville on Tuesday and play the Senators on Wednesday night at 6 pm CST.