The Moose are looking for revenge against the Stars after they suffered their first shutout of the season on Friday night with a 4-0 loss at Bell MTS Place.  Unfortunately for a team that just lost Jack Roslovic and Michael Hutchinson and didn’t have Mike Sgarbossa due to suspension was the news that a number of players were out of the lineup due to injury.  This list included Chase De Leo and Francis Beauvillier who were lost in the game last night and meant they joined Buddy Robinson, JC Lipon on the list of injured Manitoba forwards.  It wasn’t known pre-game but Peter Stoykewych is presumably dealing with an injury as well.

The one bit of good news for the team was the return of All-Star Cameron Schilling to the roster after missing four games with a lower-body injury.  To offset some of the injuries the team recalled Elgin Pearce from the Icemen of the ECHL and signed Garrett Meurs who was playing with the Toledo Walleyes.

After an energetic set of national anthems the energy in the building was good to start the game for Manitoba.  Unfortunately for the home side the Stars struck just 17 seconds into the opening frame when Jason Dickinson scored his 15th goal of the season on the first Texas shot to make it a 1-0 game.  Things didn’t get any better for Manitoba goalie Jamie Phillips who was just making his second start and first for the Moose in over a month when the Stars beat him from between the circles to make it a 2-0 game.  Manitoba began to turn up the pressure as the newly reconfigured lines got a little more used to each other.  Mason Appleton drove into the Texas zone spotted Tucker Poolman at the blueline and fired a crisp pass back to the Manitoba defenceman who wristed a shot from the point that found its way to the back of the net.  Poolman’s first ever AHL goal brought the Moose within one.  After the buzzer sounded to end the opening period the Moose were down 2-1 while leading 15-9 in the shot department.

The middle frame was fairly uneventful with the exception of a double stacked road hockey style save made by Stars goalie Mike McKenna to keep his team ahead one when Moose newcomer Garrett Meurs got a chance in tight.  Despite carrying most of the play in the middle frame the home side couldn’t solve Texas goalie Mike McKenna who made a further 15 saves to keep the one goal lead for his side.  Brendan Lemieux took a careless stick penalty as the middle frame was almost over which meant the home side would start the final frame on the penalty kill.  Moose again held a 15-9 shot edge.

The final frame didn’t begin well for the Moose as the Stars capitalized on the power play opportunity to go up by two goals.  They extended that lead to three when Manitoba was pressing to make it a one-goal game and the visitors led a nice counter-attack into the Manitoba end which extended the lead to three at 4-1. 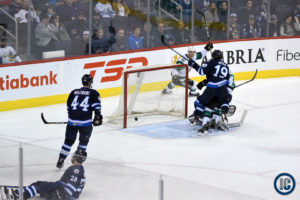 Coach Vincent pulled his goalie to try to generate something but the end result was a Stars empty net goal (shorthanded) and the visitors left with a 5-1 victory.

– Tucker Poolman scored his first ever AHL goal;
– Mason Appleton & Nic Petan both ended mini scoreless droughts recording an assist each;
– Just the second time this season the Moose have posted back to back losses;
– Manitoba has lost four of their last five games.

Coach Vincent provided the following information about his missing players:

– Chase De Leo & Francis Beauvillier: “I don’t know if they are going to be playing in the next road trip (3 games from January 24th-27th) but it’s not going to be weeks.  That’s what I know so far.  Should be day-to-day for those guys”.

– Buddy Robinson:  “Day-to-day as well.  Hopeful for the next road trip.”

Forward Jansen Harkins spoke about being re-called to the #MBMoose earlier today, and his first game back with the team #GoMooseGo pic.twitter.com/Sfzpv7v3MF

#MBMoose Head Coach Pascal Vincent spoke about the tough loss to Texas, and his impressions of some of the players that rotated into the lineup #GoMooseGo pic.twitter.com/3e4hWTZnwT