The Moose rookie replaces the top Jets prospect for the AHL All-Star game. 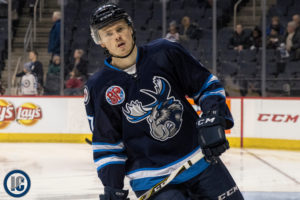 The Jets 6th round pick in 2015 has made quite the first impression during his rookie season putting up 12 goals and 24 assists for 36 points in 41 games which puts him as the points leader on a deep Manitoba Moose squad.  Jets 2015 1st rounder Jack Roslovic is up with the big club and was supposed to represented the Moose at the 2018 AHL All-Star game in Utica, NY on Sunday/Monday.  Instead, his replacement will be the first year pro out of Green Bay, Wisconsin who has seen his stock rise since he first put on a Moose uniform this season when he started on the 4th line for the first few games of the season to a consistent presence on the top line alongside Jack Roslovic and Nic Petan.  Appleton is currently third in AHL rookie scoring and 13th in overall scoring.

He will join Moose coach Pascal Vincent, defenceman Cameron Schilling and Michael Hutchinson (although he is up with the Jets and could also be replaced if Steve Mason isn’t healthy) who were all previously selected to represent the Central division.