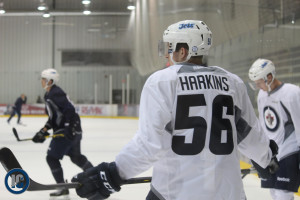 The Moose made another move today adding Jansen Harkins, a 2nd round pick of Winnipeg in 2015 (47th overall) to the roster.

And clearly the prospect is excited tweeting:

Off to Peg! Excited for the experience! It will be fun!! #legoo #tooexcited

The Manitoba Moose hockey club announced today that they have signed forward Jansen Harkins to an amateur tryout agreement.

Harkins, 18, registered 24 goals and 33 assists for 57 points in 69 games for the Prince George Cougars of the WHL this season. He also had two goals and two assists for four points in four playoff games.

The native of North Vancouver, BC has recorded 54 goals and 116 assists for 170 points in 211 career games in the WHL.

He was selected by the Winnipeg Jets in the second round, 47th overall in the 2015 NHL Entry Draft.

The Moose open up a two-game series against the Milwaukee Admirals on Tuesday, Apr. 5 at the MTS Centre at 7 p.m.