Josh Morrissey is the Moose nominee. 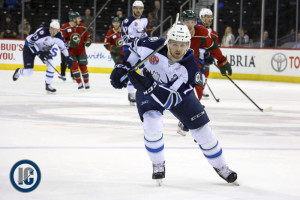 Hard to find someone more deserving of this recognition than Josh Morrissey.  Win or lose he meets with kids after every home game and always has a smile on his face, regardless of the result.

The Manitoba Moose are proud to announce that Josh Morrissey has been named the team’s winner of the IOA/American Specialty AHL Man of the Year award for his outstanding contributions to the Manitoba community during the 2015-16 season.

In his first year of professional hockey, Morrissey has endeared himself to the community with his tireless efforts to make a difference, particularly in the lives of local youth.

He took it upon himself to set up meet and greets following every Moose home game with kids from the Winnipeg Jets True North Foundation, which supports local charities that help serve disadvantaged youth.

Morrissey purchased tickets to each Moose home game which were then donated to kids from the foundation to allow them to attend the game. Following each game, he would discuss the importance of education, teamwork, respect and physical fitness to the group in attendance. Over the course of the season, he spent countless amounts of time meeting with over 200 children during these sessions.

Morrissey was also instrumental in the success of the team’s “Stick to Reading” campaign where Moose players visited local schools to help teach the importance of literacy. He went above and beyond by sharing stories of his own success as an honour roll student and his determination to succeed in the classroom.

In March, the Moose dedicated the month to autism awareness and Morrissey volunteered his own time to meet with over 20 families who have been directly affected by autism following the Moose game on March 26.

During numerous team initiatives throughout the season, he took on a leadership role including when the Moose visited Siloam Mission to deliver donated clothing for those in need and Assiniboine Park Zoo to help raise funds and awareness for the Zoo’s Polar Bear Rescue Team. He also took the time to meet hundreds of fans during the team’s community club practice this January.

Morrissey is now one of 30 finalists for the AHL’s 2015-16 Yanick Dupre Memorial Award, honoring the overall IOA/American Specialty AHL Man of the Year. The league award is named after the former Hershey Bears forward and AHL All-Star who died in 1997 following a 16-month battle with leukemia. The winner of the Yanick Dupre Memorial Award will be announced by the American Hockey League at a later date.