Looking ahead at the promotional giveaways and events for the upcoming Moose season.

Hockey fans in Manitoba won’t just be getting Jets promotional items and events as the Moose announced their schedule of events and giveaways today as well. 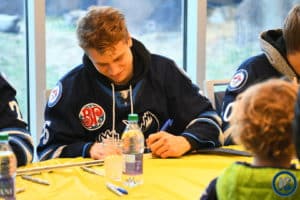 Nelson Nogier signing a stick for a fan.

The 20th Season of Moose hockey in Manitoba gets going at Bell MTS Place on Oct. 11 against the Toronto Marlies.  The first 6,000 fans to enter the arena will receive a 20th Season-branded light-up wristband, and fans will receive a schedule cling while leaving the building.

The Moose will wear four specialty jerseys this season, including a military themed sweater for Remembrance Day (Nov. 11), a uniform honouring indigenous culture for Follow Your Dreams Day (Jan. 18), a commemorative look for the 20th Season Game (Feb. 7), and a puzzle piece themed jersey on Autism Awareness Day (March 1).

Leading up to Christmas, join the Moose for a weekend of holiday fun at Bell MTS Place on Dec. 21 and 22.  Get your photo with Santa and take home a professionally printed portrait, in addition to more holiday themed activities.

The home schedule comes to a close on April 5 with Fan Appreciation Day featuring hundreds of prizes and giveaways in a salute to the fans.