Jets Show Off Their Skills

A recap of the first annual Winnipeg Jets skills competition

After an open to the public practice from 5:30 to 6:30 the first annual Winnipeg Jets Skills competition took place at the MTS Centre.

The arena was filled with close to 10,000 fans and the MTS Centre staff had the arena in full force with it’s usual production elements. Tim Stapleton who surprised many this evening, wasn’t surprised by the enthusiasm of the crowd.

“That’s not surprising in this city, we’ve got the most loyal fans in the NHL. It’s just like a home game, it’s the best city to play in right now, it makes hockey a lot of fun.”

Television and radio play-by-play men Dennis Beyak and Brian Munz were the MC’s for the evening skating around the rink interviewing players during, before and after each event. The players did their best to show off their personalities. Most of the players wore a hat or toque during the event (available at “Jets Gear”) it shows how much Jets Gear is truly available as I don’t think any player wore the same hat.

Each player were assigned to compete in specific events and, all players will competed in the breakaway relay. Jim Slater and Zach Bogosian were not available due to injuries. Eric Fehr was the only player on the injured reserve to participate.

Here were the rosters for the evening.

The first event to begin the night was breakaway relay. Each player took a turn shooting on the opposing teams goalie. After each player has gone the score remained tied, almost each shooter ended up getting a second shot until the tie was broken by Blake Wheeler. 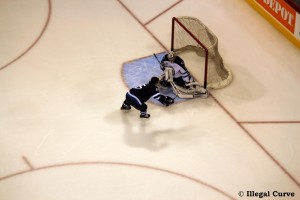 Alex Burmistrov had this nifty move (see video below), Evander Kane also tried to flip the puck up and bat it out of the air into the net but it went wide. There were a few other solid moves but the goalies put on the show in this event.

After the breakaway competition, the goalies changed into their street clothes and let the players do the rest. The fastest skater was the next event. Going into the competition Evander Kane was the favourite, he took two runs because some players from the bench threw a water bottle at him during his skate. During his second try, they threw a water bottle at him again but he still managed to tie for the top time.

The biggest surprise was Tim Stapleton leading the pack with 14.06. Evander Kane tied him on his second run. It may have been an eye-opener to everyone in the building, but Stapleton wasn’t too shocked, saying,

“I think that might be the only reason I get a chance in the NHL sometimes, I just try to not fall out there, but I guess it worked out.” 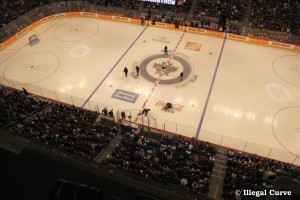 The next event was accuracy shooting. This competition is fairly standard, hit four targets in as few shots as possible, trying to go for the fastest time.  It is worth noting that for spectators this event had the most downtime. After each shooter, The MTS Centre Crew had to remove and replace each target. MTS Centre staff did their best to entertain fans with giveaways.

Kyle Wellwood lead off and set the tone for the event going 4/4 in 9.38 seconds. His time would stand as the fastest to hit the four targets. His comments on finishing first:

“that’s the second time I’ve done it, and I’ve gone 4/4 each time, today they were even bigger targets than normal, it was a little easier”

“that’s the strategy, it’s more of a saucer pass towards the target than a full shot” 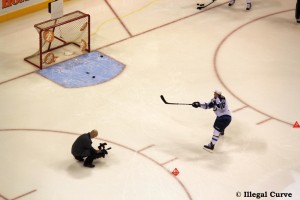 I wasn’t too interested in the team aspect of the game, but at this point Team White was running away with the event at a score of 21-5. To be honest, I wasn’t sure what was worth how many points.

The next event was Puck Control Relay, we’ve all seen it at the All-Star Game, players carry the puck in and out of pylons. There were two heats in teams of three, and the final heat was a one on one showdown between Evander Kane and Alexander Burmistrov.

The last event was the one everyone had been waiting for. I would have never thought that watching a puck go into a net at 100 MPH could be so exciting. Everyone had picked Dustin Byfuglien to have the hardest shot, and he was the finale saving the best for last.

Dustin Byfuglien didn’t disappoint with his monster 104 MPH blast. The surprises in this round ere Tim Stapleton’s 96 which lead for a bit, and Chris Thorburn’s 98.

“everybody picked the same person, that much size coming down on the puck is going to win every time”

When 6 foot 5, 265 lbs Dustin Byfuglien picked 5 foot 9 180 lbs Tim Stapleton to give him a run for hardest shot, most people in the arena were a bit surprised. Stapleton was up to the task shooting a 96 that was the number one speed after a few shooters, his score even surprised himself.

“I didn’t know if that 96 was in kilometers..or what (jokingly)”

“I’ve never shot hardest shot or anything before, to see 96 I was surprised by myself.”

Chris Thorburn also lead the competition for a brief period, was confident that Byfuglien would score in the 100s.

“No, I had no confidence in that (98 MPH) standing with Buff coming behind me. I knew he would shoot well over 100 and he did. But I’ll take second!.”

“I was nervous going in because I never had my shot measured before, I’ll stand with 98, I’m pretty proud of that.”

“I think with the fans coming in, there was 10, 11 thousand, it was bumpin’ like a game night, that’s awesome to see and great to be a part of.” 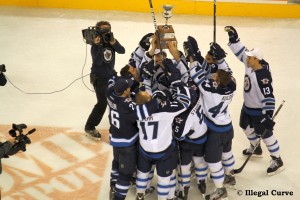 After the finale Team White were the winners, taking the match 25-11, they lifted the trophy and will probably be having dinner at some lavish Winnipeg restaurant courtesy of Team Blue. (I made that last part up…Winnipeg doesn’t have any lavish restaurants) (Kidding)