Jets prepare for “biggest game of the year”

The Jets practiced today for the “biggest game of the year”, Coach Noel spoke to the media about today’s work day in Washington.

It’s a “must win”, the “biggest game of the year”  “do or die” an “elimination game” throw any cliche you want at it, but tomorrow night’s game against Washington is an important one for the Jets to have any shot at the playoffs. Yesterday’s practice in Washington was a light practice to get the feet moving,  Coach Noel said today’s was more of a workout.

“We kind of focused our objective for Washington on what they do and what we need to do, that was our objective, and we got that done today.” 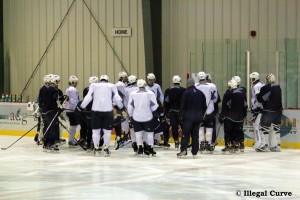 Dustin Byfuglien hadn’t been practicing too frequently, but he was on the ice today and stayed for all of practice.

“He’s slowly getting better, we’re trying to get him better, he hasn’t practiced much with us and we’d like him to take part in that, but his health is what determines that. We tried it today and I’m just got he got through practice.”

Toby Enstrom didn’t practice today, as he was sitting out for maintenance, Coach said he was a sure thing for tomorrow. Eric Fehr who is on the trip but has not played since last Friday, will not be in the lineup tomorrow night.

It’s been said for just about every game the Jets have played for the past month, but even Noel acknowledged that tomorrow night’s contest against Washington ss a big game.

“It’s a big game, let’s be real, it’s a big game, we’ll be watching that Washington game tonight, see what they do there, that will determine somewhat the urgency. Really for us you’re running out of games, so you’ve just got to win. We can’t control what they do anyway, but we’ve got to get off to a good start, they’re in a back to back situation and we have to take advantage of that, hopefully jump on that and go from there. Is it an elimination game? It puts you behind the eight ball. We’ve still got a ways to go even if you win the game; we’ve got a lot of work to do.”

“From their standpoint they are going to be pushing as hard as they can to put a greater distance (between us). That’s the fun part of the game, it’s no different than the game at home.”

The Jets can scoreboard watch all they want, but Noel knows it is up to them to control their destiny.

“You’ve just got to win as many as you can and hope the stars align.”

Tomorrow is just a big of a game as any, but don’t expect any Disney like motivational speeches from Coach Noel.

“I don’t know at this time of the year that you need a lot of motivation, I think all your players know it, they sense what’s happening, you don’t need to draw pictures for them. I don’t think you need to sit here at this level and give them the ra-ra speech they pretty much know what’s going on.”

As part of the “coaching fraternity” Noel was asked to comment on the Sean Payton suspension in the NFL.

“You never like to see that, I do understand the stand point that the league is taking, you’re trying to protect the players, and you should. I’m not sure that you want to be putting bounties on people I’m not sure that that’s a good idea. That’s something they have to deal with, I think they’ve dealt with that pretty clearly and it sends a message. It’s a good move.”

The Jets can practice all they want, but the real work will take place on the ice tomorrow night when the Jets take on the Capitals at 6pm from the Verizon Center.