How good is Ondrej Pavelec?

Two weeks ago, Richy and I each posted articles where we gave five reasons why the Winnipeg Jets would or wouldn’t make the NHL Playoffs this coming season. In my piece, I argued that the Jets would make the playoffs and I cited the goaltending tandem of Ondrej Pavelec/Chris Mason as a huge reason for this. In fact, in my article, I made the first Illegal Curve bold statement of the summer, as I predicted Ondrej Pavelec would be a Vezina Trophy candidate in 2011’12.

But is Ondrej Pavelec really that good? 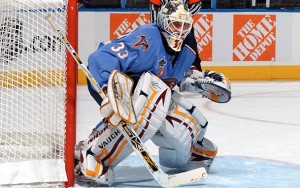 Before I attempt to answer that question, I must say that I am not backing down from anything I’ve already written on the website or said on The Illegal Curve Hockey Show. I strongly believe that the Jets can earn a playoff spot in the Eastern Conference and I believe that Ondrej Pavelec has the ability to be one of the best goaltenders in the National Hockey League.

More on why Ez feels that Pavelec will be a difference maker this season after the jump.

Is this assertion unrealistic? Some of our readers (and members of Illegal Curve) have told me that I’m being too optimistic and that is fine because they’ll be buying me beers next April (just kidding).

Because of his age (23 years old), NHL experience (119 games) and location the last two years (Atlanta), Pavelec remains somewhat of an unknown in the hockey world. Pavelec is considered to be above-average but not elite, technically sound but not flashy.

“He’s a bona fide NHL starter having endured some bumps along the way. Included as a back up to Tomas Vokoun on the Czech Olympic team and had a marvellous first half of ’10-11 – stealing some games outright – before faltering down the stretch in conjunction with a total team collapse. Not necessarily right to pin the second half woes on goaltending. His save percentage was a remarkable .914 for only 21 wins and sub-.500 record (21-23-9).

He’s grown into a capable NHL starter with a bright future. He’s very athletic, flexible and quick. Plays his angles well and starting to put it together in terms of rebound control and not getting drawn out of position, but has improved year over year. His stickhandling is a work in progress as well. There’s a star in there somewhere, but still questions as well.

It’s a pivotal year for him becoming a restricted free agent at the end of the season. His contract negotiations could be hinged directly to his Jets debut. Regardless, he’s the right player to kickstart the franchise and build on a solid foundation from the crease on out.”

This is pretty high praise from Katsaros as well as good insight into the Jets Number-1 goaltender that many remain on the fence about but not quite an affirmation of my thesis though.

A statistic that IC’s Richard Pollock likes to use when analyzing goaltenders is Even Strength Save Percentage, a statistic that is a little more telling than the basic save percentage stat that doesn’t exclude power play goals against. Last season, in 58 games, Pavelec’s E.S.S.P was .928 (or 92.8%) which was 14th best in the National Hockey League. This is impressive when you consider that the Atlanta Thrashers had the third worst goals against total in the National Hockey League, surrendering 269 goals and also that the average E.S.S.P. in the NHL last year (for goaltenders who played a minimum of 20 games) was .921.

Using the regular old save percentage statistic, Pavelec was better than Martin Brodeur, Miikka Kiprusoff, Jimmy Howard, Jaroslav Halak and Steve Mason. This is by no means proof that he is a better goaltender than these established tenders, but this also doesn’t hurt my case either does it? 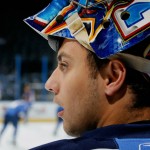 Look, Ondrej Pavelec is a good, even great goaltender, but I think he has been overlooked as an excellent goaltender capable of becoming an elite goaltender. People forget that Pavelec came into the NHL at the tender age of 21 years old in 2007’08 and ran former 1st overall draft pick Kari Lehtonen out of town a few years later.

Pavelec won a Calder Cup Trophy in the American Hockey League (in 2008, he won all 16 games for the Chicago Wolves and posted a superb .921 save percentage) and has proven time and time again that, even at a relatively young age, he can play night in and night out and lead his team to victory.

Pavelec is a quintessential winner and he has not been given as much credit as Montreal Canadiens goalie Carey Price, another young goaltender who won a Calder Cup with the Hamilton Bulldogs (2007). Now, before you start rioting Habs fans, I am not saying that Pavelec is as good as or better than Price, but I am saying that he is in the same league as Price and certainly has the ability to post similar numbers to what Price did last year (38 wins, 8 shutouts, .923 save percentage). The reason I believe Pavelec can post these numbers in 2011’12 is that Winnipeg’s defense will be better this year (Zach Bogosian has improved, Mark Stuart was a nice addition and Randy Jones is better than Brent Sopel).

Fundamentally, Pavelec is an A goaltender. He is tall, quick and covers the net almost as good as anybody, with the exception of maybe Price, Henrik Lundqvist and a handful of others. He has posted very respectable numbers on poor Atlanta Thrashers teams the last two seasons and has proven that he can be the Number-1 guy at a very early age.

There are some negatives to Pavelec’s game and I would be remiss if I didn’t mention some of them here. Firstly, Pavelec has shown signs of extended inconsistency and his play has tailed off immensely in the second half of the last two seasons but as Gus Katsaros mentioned, this cannot be fully blamed on Pavelec as he was negatively affected by the team’s overall downslide. Pavelec’s stickhandling is also poor and he does still struggle up high.

In conclusion, Pavelec is ready to take the next step this season and will benefit greatly from more stability in Winnipeg.

Whether or not that means a Vezina-caliber season remains to be seen.

Hey, at least I made my argument.