Hosting the Petard: Blending Together the Past & Present

How much of a value do you place on nostalgia? The sights and smells of a time bygone. Of memories playing as a child in the yard, eating your baba’s chicken soup, of a time where innocence reigned supreme.

For most of us, it’s not a difficult question to answer. We all have our cherished childhood memories, and we re-live them be it through food, experiences, whatever. That’s part of the reason that we like when family comes to town—we get to eat and have experiences we no longer undertake on a regular basis. When family comes to town, we go hog wild in the name of nostalgia. (My uncle loves Pizza Place pizza in Winnipeg—triple salami, double cheese. I may get this once a year—if I had it any more often, I would be next in line for an angioplasty. Of course, when he comes to town, I get to indulge in the name of nostalgia.)

While for many of us the issue of nostalgia does not involve any decision more consequential than which restaurant is going to be responsible for a coronary, for a sports franchise, especially a returning sports franchise (read: Winnipeg Jets), the question of balancing nostalgia with new, is one they have to ponder deeply.

Now that True North bit the proverbial bullet and named the team the Jets, many fans have been clamouring to see all of their old memories & favourites return as well.

The answers to that question after the jump. 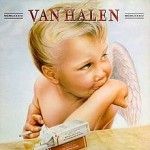 One of the quintessential songs of the 1980s, Jump was the introduction song for the Winnipeg Jets. While it was not the only song the Jets were introduced to (few fans remember that the team scrapped Jump in its last season), when people hear Jump, the Jets immediately come to mind. That, and cheesy 80s style music videos

Verdict: Considering that most of the members of Van Halen, and their original fan base, cannot jump without breaking a hip, it’s time to provide Jump with a walker and move it into the retirement community 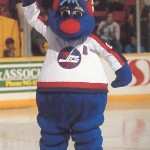 How to describe Benny? The “hair” of a push broom, the nose of a long lost ancestor of Rudolph the Reindeer, the googly eyes of a drug addict, the “skin” tone of a Smurf, Benny was the Winnipeg Jets mascot. Much like a wrestler under a mask, he hailed from “parts unknown” but was named for both Benny Hatskin, the original founder of the Winnipeg Jets, and to pay homage to the song “Benny and the Jets” by Elton John.

Verdict: There’s something about the big blue oaf that makes me want to see him again. That, and I have no earthly idea what a better mascot would look like. 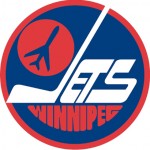 No real sense in delving too deep into this topic, as True North has been clear that this won’t be a “Cleveland Browns situation”, and the team will be getting a brand new logo, jersey and colour scheme.

Verdict: Perfectly fine to me. The logo/jersey of yesteryear was in desperate need of modernization, yet with the advent of the 3rd jersey, fans will be able to hearken back to the older jersey. Plus, it has given graphic artists both local and from around the world the opportunity to experiment and design their suggested logo/jersey, some of which have been fabulous renderings. It’s worth noting though, that while “off-site” merchandise sales of all 30 teams are divided evenly, merchandise sold at the team’s local “pro-shop/home arena” are not included in the pooling, rather the revenue generated goes directly to the respective team. 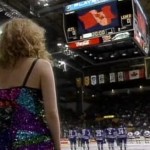 The irony that Jennifer Hanson, she of sequined dress fame, currently lives in Atlanta should not be lost on anyone. I’m not sure there is enough money in being an anthem singer though to warrant a move back to Winnipeg

Verdict: Fly Jennifer in to sing the anthem at the home opener. After that, and for the regular season only, continue the Moose tradition of having local school choirs sing the anthem—it would continue a great community based program. For the playoffs, have the fans sing Oh Canada en masse, or get someone with a great set of pipes lined up to belt it out loud and proud. Please, no Maria Aragon.

Portrait of the Queen 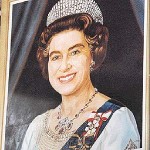 Oh to have been a fly on the wall when the decision was made three decades ago that the Winnipeg Arena was in desperate need of a larger than life size portrait of the Queen. Of all the bizarre quirks of the old Winnipeg Arena, this may have been my favourite. Maybe if the team had still been called the Winnipeg Victorias then paying tribute to  the monarchy via portrait would have made sense, but regardless, it was completely illogical, random yet perfect.

Verdict: I like the suggestion made to us on Twitter (@illegalcurve) by “The Jets are Back”, suggesting we honour the potential future Queen, Kate Middleton, with a giant portrait of her. Of course, when Illegal Curve’s Richard Pollock inevitably tries to date the portrait, that will make for some awkward moments. 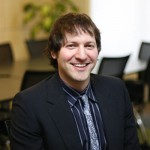