Gregoire, who played his junior hockey for the Winnipeg South Blues and Lincoln Stars prior to moving on to UND, is a gregarious winger with good offensive instincts.  A former member of the all-WCHA Academic team, Gregoire is blessed with above-average hockey sense and is a player who makes the most of his opportunities. 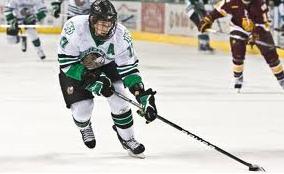 More on Gregoire after the jump.

The versatile left-winger left school after his junior year to take advantage of a cap loophole and make himself a free-agent. Fielding offers from several teams, Gregoire decided on the home-town Jets.

Going forward, Gregoire figures to be in the mix for a job on the left wing with the big club. A 1989 birthdate, Gregoire will bring a mature game to camp and Illegal Curve would not be surprised if he made the club in a 3rd-line checking role or a 4th line energy role. A left-handed shot (quick release and accurate), Gregoire is said to be very coachable and well-liked in the room.

Standing not quite 6’ tall and tipping the scales at nearly 200 pounds, Gregoire can play a variety of styles and could make himself a valuable addition to Coach Noel’s depth chart. The aforementioned hockey sense, coupled with his preference to play up-and-down the wing and his knack for scoring timely goals would seem to indicate that he would slot in somewhere between 3rd and 6th on the Jets current left-wing depth chart.

Working in Gregoire’s favour is the fact that he is a little older than Carl Klingberg and he likely has more offensive upside (scoring at more than a point-per-game in the WCHA) than both Klingberg and the recently acquired Kendal McArdle. On the other hand, both Klingberg and McArdle have been playing professional hockey, so Gregoire will have to work hard to set himself apart from the pack by displaying some grit (he has it) and toughness (ditto). Gregoire’s leadership qualities may also come into play, and it never hurts to have a local kid in the lineup.

We’ve got depth: A look at the updated Winnipeg Jets Team Depth Chart
Hosting the Petard: Blending Together the Past & Present