Have the Jets switched to using a goalie rotation?

At the conclusion of the 2013-14 season we were told by GM Kevin Cheveldayoff that Ondrej Pavelec would be the #1 goalie for the Winnipeg Jets.  This caused consternation throughout the summer among those fans who felt that Pavelec wasn’t a top goalie in the NHL and didn’t deserve this type of loyalty from the organization. 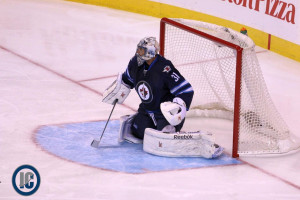 When the 2014-15 pre-season kicked off Jets coach Paul Maurice reiterated this position instead suggesting that his team’s commitment to defence would have to change before they could truly judge their goalies.  In his September 18th media scrum which kicked off the pre-season coach Maurice said “Once the team is better defensively, with a better structure, then we can assess Pavelec”.

Just prior to the start of the regular season the Jets traded Eric Tangradi, whom they had demoted to the IceCaps of the AHL to the Montreal Canadiens for veteran goalie Peter Budaj.  This had tongues wagging as to whether the Jets had faith in Michael Hutchinson as a back-up.  This was almost immediately quashed as the team sent Budaj down to St. John’s leaving Pavelec and Hutchinson as the goalie tandem in Winnipeg to start the year. 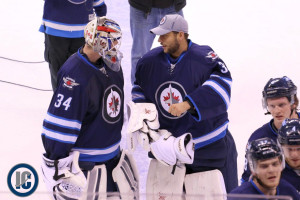 Fans were riding high after a season opening 6-2 win in Glendale over the Arizona Coyotes but that joy quickly turned to concern once they dropped back to back games against the Sharks and Kings.  Even more disconcerting to fans was that Michael Hutchinson lasted just 22:03 in his first game of the year before being pulled after he allowed three goals on 13 shots (.769 save %).  Coach Maurice then spent the rest of October riding Pavelec, playing the Czech netminder in the next seven games, to close out the month.  Pavelec finished October with three wins, three losses and a shootout loss.  Aside from the 22:03 Hutchinson played in the October 2nd loss in LA he didn’t see any action again until he played 18:09 in relief when Pavelec was pulled against the Lighting on the 24th.

Despite an incredible 33 save, 1-0 win over the Blackhawks in Chicago on November 2nd, coach Maurice continued to ride Pavelec playing him in five of the first six games to start November.  During this stretch of six contests Winnipeg was 4-1-1 and Pavelec had a .956 save % in these games.  In the pre-game chat at PNC Arena in Raleigh reporters asked coach Maurice why it was a good time to start Hutchinson.  “He was going back in sooner rather than later the moment that Chicago game was done.  You just don’t want to leave a guy who has had a performance like that out too long. It puts us in a position if he has another strong outing to look at the next block of four games as another start for him.”  Hutchinson only allowed one goal in a 3-1 Jets win over the Hurricanes that evening stopping 22 of 23 shots (.957 save %). 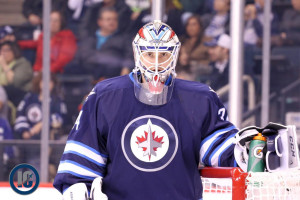 It would appear that it was at this point in the season in which the philosophy of the Jets bench boss appears to change.  Since that Hutchinson win over the Carolina Hurricanes on November 13th neither goalie has played more than two games in a row.  The two goalies pushing each other seemed to have helped as Winnipeg finished the month going 8-4-3.  Pavelec was 4-4-1 (.928 save %) while Hutchinson went 4-0-2 (.956 save %).  Of course it’s worth noting that of Pavelec’s nine games six were against playoff teams whereas in Hutchinson’s six games he faced two playoff teams.

On December 1st when coach Maurice was asked about his goalie philosophy he said “Just make sure neither one of them is out of the net more than seven days for the most part.”  While it is still early in the month of December the Jets have gone 3-0-1 with both goalies playing in two games apiece.

During his pre-game chat with Dennis Beyak of TSN in advance of the game against the Dallas Stars, Dennis asked whether coach Maurice is now using a goalie rotation to which the bench boss said “Seems to be that way.  I don’t think we’ve ever looked past three games.  We’ve had two game blocks with the idea that if they both played well we would keep it going and if not then we would give the hotter of the two guys the third game.  They both have played very well so we’ve just kind of stayed in this role.  It changes over the course of the year.  It’s not different than your lines, you move people around, you change your philosophy on goaltending.  Right now, they are both playing well so we don’t want to change anything to keep them out of that rotation.”

A look at the Jets goalie tandem numbers through 29 games:

So it looks like the Jets are going to continue the tandem effort with Pavelec and Hutchinson.  With the team sitting in 7th spot in the Western Conference and within three points of 1st in the Central division it would appear to have some merit.