Note:  The Jets hot streak continued last night in Dallas as they left Texas with a 5-2 win over their Central Division rival Stars.  They took off for Colorado following the game for a date with the Colorado Avalanche tomorrow night at the Pepsi Center.  The Avs are currently 7th in the Central and have lost four straight games.  Be sure to keep it locked to @illegalcurve for all the latest Jets news.

Note II:  After a two week hiatus due to back-to-back Wednesday night Jets games, NHL Mid-Week with Illegal Curve returns to the radio airwaves of TSN 1290 tonight from 6 pm to 8pm.  Join Drew, Richard and Ezra as they analyze last night’s Jets victory in Dallas and preview Thursday night’s game in Denver versus the Colorado Avalanche. To listen live, click here.

Winnipeg Free Press:  A view from the top.  A long read from Gary as he chatted with Jets owner Mark Chipman for 30 minutes on Tuesday to answer a number of questions on the operation of the Winnipeg Jets.

Winnipeg Free Press:  Jets’ Lowry busts loose.  The Jets are a team looking for scoring from folks without the name Ladd, Little, Wheeler or Byfuglien and tonight while Wheeler did manage to score so did Lowry (x 2), Perreault and Frolik.

Winnipeg Sun:  Jets blast Stars.  It was quite a game against a division rival and Ken breaks it all down for you in his column from American Airline Center.

TSN:  That’s Hockey 2Nite (video).  The Jets were averaging over three goals a game in their last six games, and the trend continued against the Stars. TH2N breaks down what’s led to Winnipeg’s recent offensive breakout. 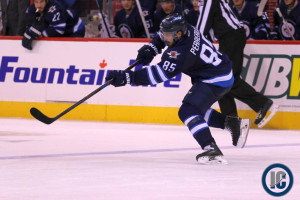 Dallas Morning News:  Stars remain winless in division after 5-2 loss to Winnipeg.  As the Jets learned last season you won’t have much success if you cannot beat the teams in your division.

Dallas Morning News:  Stars jumbotron trolls entire city of Winnipeg; Stars then proceed to get blown out by Winnipeg.  I thought it was funny.  Adds a bit of spice to two teams without much in the way of rivalry.

Winnipeg Free Press:  NHL expects to announce outdoor games in next couple of months.  Based on a conversation between Gary and Mark Chipman last year, the suggestion is that Winnipeg is likely to host a game next season.  If that is the case, who would you like to see the Jets face?

The Hockey Writers:  Interview With Jets Prospect Pavel Kraskovsky.  Not much Jets content in the article but an opportunity to learn more about the Jets Round 6 selection 164th overall in 2014.

Illegal Curve:  Coach Maurice post-game (audio).  On the importance of win over Dallas.  How big was it to capitalize on that first power play?  What does he think when he sees Mark Scheifele come to the defence of a teammate.  On Adam Lowry stepping up.  What has been key for his top line this year?  Using the entire forward group tonight.  Getting ready for Colorado.