Recap of the action from Bell MTS Place.

The Skinny: The 11-15-2-0 Moose played host to the 16-11-2-2 Grand Rapids Griffins – AHL affiliate of the Detroit Red Wings. These two teams have recent history, as the two met this past spring in the first round of the playoffs, with the Moose coming out on top. With several key Moose players out of the lineup due to injury, including Seth Griffith, C.J Suess, and Tucker Poolman, the Moose faced a tough test. 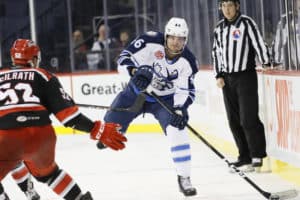 Grand Rapids Goal: On the powerplay, Chris Terry got the puck at the right faceoff dot and fired a half-slapper through a screen, beating Ken Appleby blocker side.

Grand Rapids Goal: Rookie winger Tyler Spezia came down the left wing and took a seemingly harmless shot along the ice, but it squeeked through Appleby’s five-hole to give the Griffins a 2-0 lead.

Grand Rapids Goal: On the powerplay, former Ottawa Senator’s 1st rounder, Matt Puempel took a slapper from the point, and Axel Holmstrom was Johnny on the spot, swatting the rebound just past Appleby to give the Griffins a commanding 3-0 lead.

Manitoba Goal: Off a simple dump-in, Sami Niku came hard down  the boards, corralled the puck and sent a quick pass to the slot for Peter Stoykewych, who ripped a shot glove side to get the Moose on the board with 5 minutes to go. 3-1 Griffins.

#23 Michael Spacek – with the Moose undermanned up front, Spacek bears a lot of weight on his shoulders to lead the attack, but he wasn’t able to get the job done today. The most memorable play of the day had him breaking in two-on-one in a great shooting position, but instead he passed to the slot and the play was broken up. All that said, he doesn’t have a lot of help right now with all the injuries. He’s tied for second on the team in scoring with 18 points in 27 games, and is having a pretty good sophomore season overall.

#26 Jansen Harkins – despite having a huge opportunity on the top line, he wasn’t able to take advantage today. He looked lost at times both on the powerplay and at even-strength, holding onto the puck a bit too long, and overhandling the puck when he needed to make a quicker choice. With just 6 points through 28 games this season, he’s having trouble building on what was a disappointing rookie season last year for the Moose. More was expected of the 2015 2nd round pick following strong debuts in his teenage years (7 points in his first 10 AHL games).

#43 Skyler McKenzie – a small pit-bull on skates, McKenzie uses all of his 5’8 frame when he’s on the ice, banging bodies and creating opportunities in limited ice time. Considering the lack of ice time he’s received this year – and a dearth of powerplay time – his 7 points in 21 games are pretty totals so far. Look for him to carve out a bigger role as the season progresses, as his combination of speed and skill are in fairly short supply on this roster.

#7 Logan Stanley – taking on a larger role with the Moose with Tucker Poolman being out of the lineup, Stanley has begun to assert himself in pro hockey. He was pretty good in today’s game, getting involved in the offence, without giving away anything defensively despite playing big minutes. His skating remains an obvious area in need of improvement, but his hands and hockey sense are better than he gets credit for. Along with his natural size and strength, and a bomb of a shot, he remains an intriguing prospect. Worthy of note: Stanley is 4th on the team in shots, and is averaging nearly two per game.

#8 Sami Niku – While he certainly still has the ability to take over a game, he only showed glimpses of that skill in this game. He also had a few forgettable moments, with several pucks bouncing over his sick, and a blunder where he fell at his blueline to create a breakaway against. With the Moose offence a shadow of what it was last season, his offensive stats are also down, with 7 points through 15 games after 54 points in 76 games last season.

#36 Nelson Nogier – with his quiet, simple style of play, Nogier wasn’t noticeable in today’s game for better or for worse. He skates well for a guy his size (6’3), but doesn’t add much to the offence, as exemplified by 1 point in 27 games.

Saturday, December 30 at 4:00 pm, versus the Colorado Eagles at Bell-MTS Place.