It’s January which means it’s freezing cold in Winnipeg but the Jets are hoping they can get hot on the scoresheet tonight when they welcome the Buffalo Sabres to town. 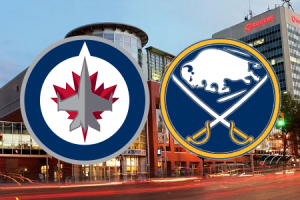 The Story:  It’s January which means it’s freezing cold in Winnipeg but the Jets are hoping they can get hot on the scoresheet tonight when they welcome the Buffalo Sabres to town.

The slumping Jets were spanked 5-1 by the New Jersey Devils on Tuesday night after they snapped a three-game losing streak by defeating the Ottawa Senators 2-0 on Monday night. The 10th place Jets have lost four of their last five games and have only won twice in the month of January. Winnipeg continues to have trouble on the road (7-12-4) and is now five points behind the 8th place Florida Panthers for the last playoff spot in the Eastern Conference.

Buffalo lost 6-2 to the Chicago Blackhawks Wednesday night and are quickly falling out of the playoff race in the East. The Sabres have only won twice in their last 10 games and are a team that has struggled all season to score goals. Sabres captain Jason Pominville scored two goals last night and has been consistent all year long (46 points) but goals have been hard to come by for many others on the team. Defensemen Christian Ehrhoff and Robyn Regehr, both established veterans who were acquired in the off-season, are out with injuries which means the Sabres are currently icing a very pedestrian defensive corps. To compound matters even further, Sabres goalie Ryan Miller has been human this season and at times has even looked shaky. The 2010 Vezina Trophy winner has a record of 11-13-2 this year with a .898 save percentage and 3.12 goals against average.

Remember Jets fans, it was less than two weeks ago that Winnipeg went into Buffalo and defeated the Sabres 2-1 in overtime on a beautiful goal by Johnny Oduya. The importance of that victory was huge at the time as the Jets had been previously humiliated by the Montreal Canadiens (7-3) and Toronto Maple Leafs (4-0).

One thing is for certain: The Jets will need to score more goals moving forward. The Jets have been shutout three times already this month which is simply not going to be good enough in order for the team to earn a berth in the Stanley Cup Playoffs.

*** According to Tim Campbell of The Winnipeg Free Press, Blake Wheeler will return to the line-up today for the Jets. Wheeler has missed the last two games with a throat injury.

Who’s Next: After tonight’s game the Jets will play the Florida Panthers on Saturday, January 21st (6:00 p.m. CST, CBC).

QUICKIES…..The Jets have 10 1st Round picks in their starting line-up…..For players who have played at least 25 games this year, Tim Stapleton has the best shooting percentage on the team (14.0%)……Mark Stuart has 71 penalty minutes, tops on the team…..