A look at the game 9 projected lineups and pre-game interviews.

The Jets are coming off a tough 4-1 loss to the Canucks on Saturday night while the Flames defeated the Habs in Montreal 2-0.  In yesterday’s practice we saw a new configuration amongst the top two lines which are listed below. 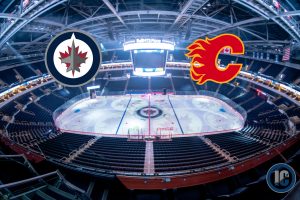 According to Ken Wiebe of Sportsnet it was an optional morning skate today at Bell MTS Place.  Ken added that Kristian Vesalainen left the ice with David Gustafsson remaining which means the Finnish winger will get his second game of the season with Winnipeg.

1. Achieving success playing as a five-man unit.
2. Does he expect Pierre-Luc Dubois to take as long to be ready as Tucker Poolman?
3. Making Pierre-Luc feel like he is part of the team.
4. Matchups for tnt (how much is based on game 1 vs Flames games of late)?
5. Importance of regulation wins
6. Setting the tone when playing a team four games in a row.
7. On getting Kyle Connor going.
8. Does the Marco Rossi situation change how he talks to his players?
9. Anticipation when playing the same time repeatedly.
10. Update on the composition of the 4th line.
11. What is he hoping to see from the top two lines?

Puck drop is at 7:00 pm CT.  Be sure to head over to illegalcurve.com following the game for a recap of the action which includes post-game interviews from the Jets room as well as from coach Maurice.