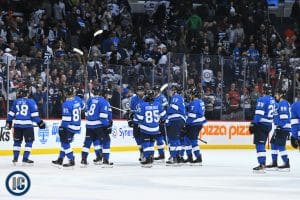 The Jets improve to 42-25-4 with their 2-1 win over the Flames to close out this three-game homestand with a second straight victory.

– Lots of iron for the Flames who hit four posts in the 1st period;
– Jets got the scoring started with a late (8.3 seconds left) 1st period marker by Mark Scheifele;
– Shots were 7-7 after 20 minutes.
– Jets had the benefit of a four-minute power play after Bryan Little got a high stick;
– But the Flames scored a shorthanded goal to tie the game;
– Good work by the second power play unit ended with a Mathieu Perreault go ahead goal to make it 2-1;
– Not much of anything happened in the remainder of the 2nd and the 3rd was a snoozer for the most part.

Connor Hellebuyck records his 30th win of the season which is the second straight year he has hit the 30 win mark.

Coach Maurice:  Thoughts on the power play goal which came after the shorthanded goal.  On the 17 shot blocks, was there more of a buy in?  On ability to throw Roslovic into the power play.  How is the team adjusting to playing without Byfuglien/Morissey?  Thoughts on the homestand are they getting to that Jets identity?  Play of Sami Niku.

The Jets are scheduled to practice tomorrow at 12 pm at the IcePlex before they leave for California.  Kick start your day with the AM Jets papers which go live at 7 am on illegalcurve.com.