A look at the game 54 projected lineups and pre-game audio. 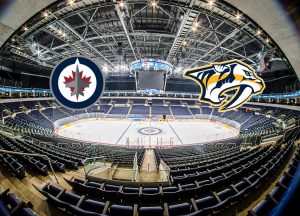 Tonight will be a battle of two former central division juggernauts who have fallen on some tough times.  Winnipeg sits fifth in the division with 56 points while Nashville is just one point back of them with two games in hand.  And both are looking up at the Coyotes who hold down the second wild card spot with 59 points.

As per usual it is an optional morning skate for the Jets according to Scott Billeck of the Winnipeg Sun.  He indicates that Connor Hellebuyck isn’t participating which likely means he will be the starter in tonight’s game.

Coach Maurice on the ending of Dustin Byfuglien’s time in Winnipeg, thoughts on the Predators and what he wants to see from his team, whether he has noticed any changes to the Preds since coaching change, the challenges presented by the centre depth of Nashville, more on Byfuglien’s legacy and will there be any lineup changes?

Coach Maurice confirmed that Nathan Beaulieu is coming off IR and Mathieu Perreault is heading onto it.