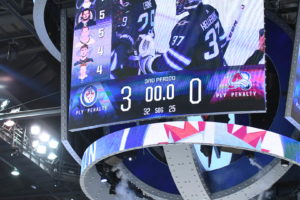 – Patrik Laine continues to be automatic on the power play with Wheeler dishing him the puck;
– Laine’s goal to open the scoring was his 24th of the season and 13th on the power play;
– Blake Wheeler added to his team best assist lead with #43 on the season;
– Matt Hendricks left the game with an injury in the opening period of play;
– Jets put a lot of pucks on net in the middle frame but couldn’t solve Varlamov;
– Blake Wheeler was originally credited with his 15th of the season to give the Jets a 2-0 lead;
– Scoring change gave it to Jack Roslovic (his second NHL goal and first in Winnipeg);
– Nikolaj Ehlers breaks his goalless streak getting an empty netter to give him 20 on the season;
– Blake Wheeler had two assists;
– Connor Hellebuyck got his 5th shutout of the season and is now 27-6-8.

Matt Hendricks and Brandon Tanev both left the game, with Hendricks leaving in the 1st and Tanev in the 3rd.  Coach Maurice indicated that Matt Hendricks was dealing with an upper-body injury but didn’t feel it was significant and he is hopeful he plays against Arizona.  He also indicated that Brandon Tanev was also dealing with an upper-body injury and was day-to-day.