Winnipeg Sun: Third meeting of season vs Avalanche on tap.  Having dropped the first two against Colorado in extra time the Jets are looking for some revenge against one of the most surprising teams in the Western Conference.  Ken sets up the action.

Winnipeg Free Press: Kulikov back on the ice tonight for Jets. (Paywall).  The revolving door between the healthy and injured continues as the Jets lose a forward and gain back a defenceman.  Mike looks ahead to tonight’s game.

Sportsnet: Breaking down Blake Wheeler’s move to centre.  An interesting look at the numbers behind the Jets captain since his move from wing to the middle. 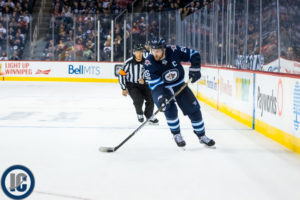 Illegal Curve: Jets vs. Avalanche pre-game report. Take a look at what happened at the rink this morning as Winnipeg gets ready to face Colorado at Bell MTS Place tonight.

Illegal Curve: Coach Maurice pre-game scrum.  Update on Scheifele.  On how he would use Scheifele when he comes back to the lineup.  Update on Adam Lowry.  On the move of Kulikov to the right side.  Possibility for Kulikov to play with different guys.  Has he seen a shift in the way OT is played this season?  How does the absence of Nathan MacKinnon change them and change the way the Jets play the Avs?  Big picture evaluation of Nikolaj Ehlers.  Did he anticipate the success they would have had (9-2-3) without Mark Scheifele?  Hellebuyck starts?

Topics: The aftermath of the Jets/Golden Knights game, The rise of Joel Armia, Jets/Avalanche Preview, Previewing the Jets month of February