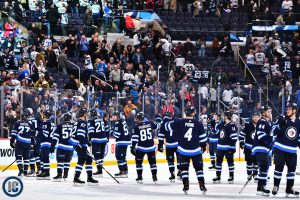 Jets had a solid start to kick off the home opener which included a power play that saw them have a number of chance to score but Devan Dubnyk stood tall.  But later in the period they were unable to clear the puck out of the zone (despite having control) and then not getting it deep when it was time to change lines and the Wild got the puck into the Jets zone and Ryan Hartman picked the pocket of Ville Heinola (and replay showed may have clipped his skates) and turned and buried a puck past Connor Hellebuyck to give Minnesota a 1-0 lead.  After 20 the Wild held a 1-0 lead and a 15-14 shot edge.

Middle frame started quickly for the Jets as the top line of Laine, Scheifele and Wheeler combined to tie the game just 1:37 into the  period.  It was a significant goal as it was the 700th point of Wheeler’s career.  Approaching the midpoint of the period Mark Scheifele drew two defenders with him before lasering a pass over to Patrik Laine who made no mistake one-timing a blast past Devan Dubnyk to give the Jets a 2-1 lead.  That’s how the 2nd period would conclude.  The visitors had a 31-22 shot advantage after 40 minutes.

Just 3:09 into the 3rd period the Wild got some sustained pressure and defenceman Brad Hunt went top corner to tie the game.  An unusual play in the neutral zone saw Carter Soucy body slam Nikolaj Ehlers which oddly enough resulted in both players heading to the sin bin.  Patrik Laine made a nice deke and got the puck over to Kyle Connor who gave the Jets a 3-2 lead.  Shortly thereafter Josh Morrissey created an opportunity which Jack Rolovic slammed home standing on the doorstep to make it 4-2 for Winnipeg.  Patrik Laine would finish off the night with an empty net goal to make it 5-2 for the Jets as they win their home opener and improve to 3-2 on the season.

Coach Maurice:  Did he like the way they played tonight against a division rival?  The play of Patrik Laine.  On Laine’s physicality.  What has he seen differently in Connor Hellebuyck’s last two games?  What did he think his team did best to survive the Wild push in the 3rd period?  Reversing the power play, whose idea was it and was he surprised the players executed it that well?  What did he think of his team handling the physicality?  On Ville Heinola looking “human”.  On the significance of Blake Wheeler achieving 700 points.  On what Wheeler has meant to the organization.  On Mark Scheifele winning battles down low.

The Jets are scheduled to practice tomorrow at 12 noon.  Kick start your day with the AM Jets papers which go live at 7 am on illegalcurve.com.