Note:  The Jets time at home will be brief as they played their home opener against the Wild last night picking up a 5-2 win thanks to a 38 save performance by Connor Hellebuyck and a four point (2G 2A) night from Patrik Laine. Today they are scheduled to practice at Bell MTS Place at 12 noon before they fly to Chicago to take on the Blackhawks tomorrow night.  Be sure to check back for the Practice Report.

Note II:  From one home opener to another as today it is the Manitoba Moose turn to host a home opener.  They were 1-1 after their road trip split in Texas last weekend.  This weekend they will face the 1-1 Toronto Marlies in a pair of games.  Ahead of the game the team assigned Cederholm and Beaudoin to Jacksonville which brings them to eight defencemen on the roster.  That number is now nine as the Jets reassigned Sami Niku to Manitoba.  Puck drop at Bell MTS Place is at 7 pm.

The Athletic:  Why the 2007 Ducks are a good example of why the Jets should remain patient with Dustin Byfuglien.  (Paywall).  Eric Duhatschek’s notebook has a good section on what happened in Anaheim in 2007 and why that could impact the Jets in 2019.

The Athletic Winnipeg:  How Patrik Laine’s growth is shining through as he rounds out his game.  (Paywall).  For all those folks who thought he was a one-trick pony it looks like this pony has a few more tricks as many of us thought he did in that repertoire.  Ken goes deep on the Finnish sniper.

Winnipeg Sun: Laine’s four-point game leads Jets past Wild.  Laine was engaged in all facets of the game and got rewarded for his hard work with goals and assists. 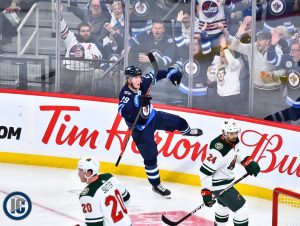 Winnipeg Sun: Jets’ Lowry checks ego at the door.  Have to think he and Copp need to be reunited as soon as Bryan Little gets healthy again.

Winnipeg Free Press:  Forward finds fast Laine.  (Paywall).  He is certainly looking like a player who made a very wise decision to bet on himself.  And the Jets will happily pay for the type of player he is becoming.

Winnipeg Free Press:  Morrissey glad to be back on ice.  (Paywall).  Jets bench boss Paul Maurice was quite clear saying that it wasn’t worth having a player like 44 for one game at the risk of potentially losing him for months.

Minneapolis Star-Tribune:  Wild fall to 0-3 with loss at Winnipeg.  It has been less than an ideal start to the season for Minnesota.  Read about the game from the perspective of a beat writer who covers the Jets opposition.

Sportsnet:  Unburdened by contract talks, Laine excelling on Jets’ top line.  You have to be able to skate to keep up with Wheeler and Scheifele and Laine hasn’t shown that to be a problem since he joined them on the top line.

The Athletic Winnipeg:  How Dennis Beyak and Kevin Sawyer prepare to deliver TSN Jets broadcasts.  (Paywall).  Murat with a behind the scenes look at the Jets broadcasting duo.

TSN: Red-hot Laine ‘absolutely’ deserves spot on Jets’ top line. Patrik Laine has started the season on fire, racking up three goals and 10 points playing alongside Mark Scheifele and Blake Wheeler. After making it known in the offseason he wants to play with the Jets’ best players, has Laine earned his spot on Winnipeg’s top line? Craig Button shares his thoughts.

TSN:  Off to best start of his career, Laine showing no signs of rust after missing camp.  Patrik Laine admits that even he didn’t know what to expect from his own game early on this season after the 21-year-old missed all of training camp. But with his contract situation now behind him, the work that he put in over the summer to try and round out his game appears to be paying off, as he’s off to the best start of his career. Sara Orlesky has more.