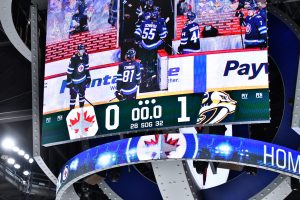 The Jets winless streak (0-5-1) at Bell MTS Place continues as they dropped this afternoon’s game to the Nashville Predators by a score of 1-0 and fall to 24-18-4 on the season.

– Patrik Laine and Josh Morrissey each had five shots on net

– Connor Hellebuyck finished with 28 saves on 29 shots (.969 save percentage)

Tucker Poolman left the game in the first period (came back) but didn’t return for the second period (or the rest of the game).  Coach Maurice was asked if he had an update on the severity of the injury “It was enough that they didn’t want him to test it.  We will get him looked at tomorrow.”.

The Jets will start to get ready for the Vancouver Canucks who are in town for a game on Tuesday.  You can kick start your day with the Morning Papers which go live tomorrow at 7 am on illegalcurve.com.