A look at the game 46 projected lineups and pre-game audio. 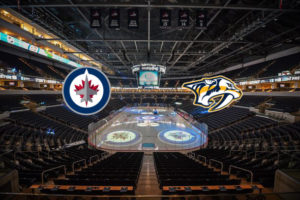 The Jets hit the ice for practice on Saturday to practice ahead of today’s afternoon contest against the Predators.  Plenty of focus on this game against their division rival.

For now the lineup is simply based on yesterday’s practice.  Coach Maurice didn’t indicate who would start but seems reasonable that it will be Connor Hellebuyck.

As per the play-by-play voice of the Jets on TSN 1290 Paul Edmonds it will Connor Hellebuyck who starts and Sami Niku is back in with Luca Sbisa coming out.

Coach Maurice spoke on Saturday following practice and as he isn’t expected to speak ahead of today’s game you can hear his comments from yesterday.

Puck drop is at 1:00 PM CST.  Be sure to head over to illegalcurve.com following the game for a recap of the action which includes post-game audio from the Jets room as well as from Coach Maurice.