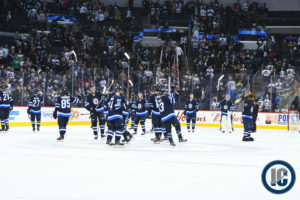 A crazy 2nd period which saw the Jets erupt for five goals on 11 shots.

Coach Maurice didn’t have an update following the game on the status of Tobias Enstrom but expects to know more tomorrow.  However, while the Jets will hold a media availability (no skate) before leaving for Nashville, coach Maurice won’t be available to speak.  The Moose play at 2 pm so if someone is going to be recalled we will know tomorrow.

Coach Maurice:  Assessment of the game.  What did he think about the Jets response to the Gibbons goal?  On Kyle Connor going to the dirty areas.  Severity of the injury to Enstrom?  Chemistry of Perreault and Hendricks.  What does it mean to be able to roll all four lines?  On Byfuglien throwing his body around in the 1st period.

Photo of the Game:

Well @ICEzzyG and @ICdave just had their afternoon made with the melding of hockey and #Seinfeld. “Gotta support the team”. #Puddy pic.twitter.com/hEJK6pnc7I

The Jets fly out on Sunday for Nashville for the first of four games on the road.