Note:  The Jets are feeling good about themselves after a three-game home sweep including a 5-2 win yesterday afternoon over the Devils.  The team has modified their schedule from a practice at 12 noon to a media availability prior to departing for Nashville where they will kick off a four-game road trip.  Coach Maurice won’t speak so we won’t get an Enstrom update from the coach however if they recall anyone from the Moose we will update you.  Update:  Enstrom expected to miss up to eight weeks.  Jets have recalled Tucker Poolman.  Click here.

Note II:  The Moose are also hot having won six of their last seven games.  They’ve won the first couple of games of this four-game home stand and welcome Laval to Winnipeg for the first time.  I’m joining Mitch in the booth for today’s game to provide some colour commentary.

Ottawa Sun:  No shortage of trade talk as NHL hits quarter mark of season.  According to Bruce’s big Sunday column in his Rumours Du Jour section Jets are willing to listen to offers on players like Matthias, Armia, Copp but while teams are interested in Trouba, the Jets aren’t interested in trading their top defenceman. 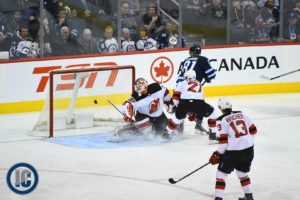 Winnipeg Sun:  Jets break out in second, dump Devils to sweep homestand.  The two teams came into the contest sporting identical records but New Jersey had stumbled of late and the Jets took advantage.  Ken breaks down the Jets win.

Winnipeg Free Press:  Jets’ quintuple-goal second period against Devils gives them fourth straight win.  (Paywall).  My baboon heart still hasn’t stopped beating as a flurry of goals had me completely buried in my laptop but had fans up and out of their seats for most of the middle frame.  Mike breaks it down.