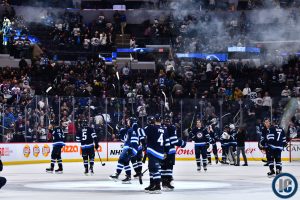 The Jets pick up the 4-1 win over the Canucks and the points streak hit four games (3W 1SOL). Winnipeg improves to 9-7-1 on the season.

– Adam Lowry scored his first goal of the season on an unselfish give and go with Andrew Copp;
– Jets are 6-0-0 against the Canucks when Mark Scheifele scores;
– Kyle Connor finished with 1G 1A;
– Connor Hellebuyck made 31 saves for the win;
– Jets have beat the Canucks nine straight times.

The Jets are scheduled to practice tomorrow as they get ready to face the Dallas Stars on Sunday afternoon.  You can kick start your Saturday with the AM Jets papers which go live at 7 am on illegalcurve.com followed by the Illegal Curve Hockey Show at 9 am on TSN 1290 Winnipeg.